We all chase silver linings in our lives. Different people, different silver linings. For some it is money, for some success in a chosen field, for others it’s the garnering of respect from those around them, and it works in combinations too. It's all to do with happiness, the thought that by the time one's life is drawing to a close that it has all been worthwhile. The one that has exercised my mind, since seeing the film, has been the silver lining of love, or the seeking thereof. Of all silver linings, it is undoubtedly the one most sought. I have been lucky in this aspect, for with my DLP (Darling Loving Partner) I have found my silver lining in spades. When my end is reached, it'll have all been indeed worthwhile.

As happens with some books, some songs and some movies, the mind is often set by them off on a course of some interesting remembering – especially since there has been a vast minutiae of people and places in this particular longish life. The film caused me to recollect two souls who figured for only a short time, years ago, and the small regret involved. Of course the stimulus for this was the wonderful SLP ('Silver Linings Playbook') – it took me back to a trip to a special place where I found two equally special beings with a story to tell me.

We are only a couple of months into this shiny new year and already I've been blessed to be able to watch some excellent Oscar fodder – 'Life of Pi', 'The Impossible' and 'Flight'. 'Quartet' and 'Hitchcock' weren't bad either, and there's 'Lincoln' and 'Anna Karenina' still to come. But, to my mind, there is something even more alluring about 'Silver Linings Playbook' than those cited movies– and I feel it's Jennifer. Some critics have described the SLP as a rom-com, and sure there are some comedic moments. The two leading protagonists are decided misfits – well, at least they start out that way – and there's been numerous films based around various permutations of that premise – last year's delightful German contribution 'Vincent Goes to Sea' a case in point.

All basic stages of SLP's supposed genre go something like this – encounter, connection, developing feelings, realisation, an impediment, and then the final set piece that overcomes all. SLP largely follows this framework, replete with the desired for Hollywood ending – sorry if that's a spoiler. Synopses of this sure-to-be classic abound on line to tantalise, but what makes SLP soar above the usual dross movie America turns out is the quirkily dysfunctional imperfections of the leading hands. Our own Jackie Weaver is the glue that holds it all together, even if she resembles a stunned mullet throughout – surely not enough for an Oscar nomination, but there you go. Bradley Cooper fits his manic character like a glove; de Niro, as the father and obsessive footy fan, grates perfectly – but Jennifer steals the limelight. This was my first meeting with Ms Lawrence, and I will be surely seeking her out in future roles. She bypassed me with 'The Hunger Games', but she definitely has 'it’. There is magic about this film – 'The Girl from the North Country' sequence, the yearning for a seemingly lost love, the old men's betting, the Indian psychoanalyst and, overriding all, the power of a contest to fully dominate one's being, in this case between footy teams and dancing partners. The final perfectly flawed dance championship rounded it all out sublimely, even if at one stage we didn't quite know if it was all going to be Hollywood, for the silver lining could have gone off in another direction entirely, and off I went in the direction of rumination. 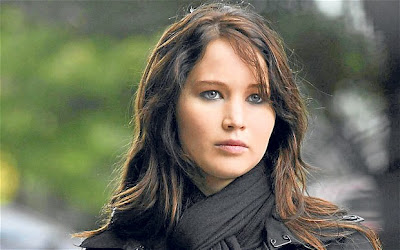 She was a sun-kissed, freckly Aussie woman, bursting with vivaciousness, perhaps carrying a little more excess weight that in her pomp, but with a shining face enveloped by ringlet curls. She was very, very comely. Think Susie Porter and you get the idea – in fact I think we'll call her Susie as I have no recollection of her true appellation. Her partner was more reticent, and I very quickly picked up on his accent. He was French. Tall, slim – his face had a bit of the ugly/handsome look to it so esteemed by his nationality in their leading men, say, someone like Daniel Auteuil. We'll call him Daniel then.

The place was Uluru in the Year of the Outback. The iconic landmark is intrinsically special in itself, but Daniel and Susie were the icing on the cake of a long, long day. It had been a 4am start that morning back up in Alice, and a long, long drive down the Stuart in the mini-bus, and then across to the Rock. I was journeying alone, and the two aforementioned were seated opposite, seemingly lost in each other. They'd be in their late thirties/early forties, but with their nuzzlings and sweet whisperings, they were akin to new lovers half their age – so initially there was no connection between us. Reaching Uluru, I wandered off alone, and returned to the bus at the appointed time to go around the corner to Kata Tjuta, before coming back for the traditional sunset viewing. Our two guides, as ocker a pair as it was possible to find, dished out some cheap fizzy plonk, and I meandered over to the viewing platform, and leant down on the railings close to the two love-birds. Glasses in hands, we exchanged platitudes about how beautiful it all was. Constant topping up of the champers started to have an effect, and I became more voluble, with Daniel/Susie responding in kind. I told them my story, they responded with theirs. By the time we'd finished doing so we were back on the bus; the best of more than slightly inebriated mates, and halfway up the road to Alice. 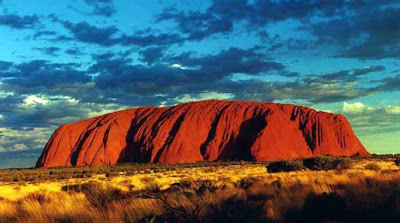 Australian backpacking girls in the UK were very marketable, once upon a time, back in the eighties – probably still are. They were readily employed for their work ethic, reliability and sunny disposition. Susie, who did most of the talking relating it all back to me during that desert night, reckoned she had the choice of a number of positions a few days after disembarking her Q-bird. She'd made her way to Earls Court, as you did back then, and the rest was easy. She settled on waitressing at a French restaurant, as it seemed the classiest option. Now if Susie was still stunning approaching forty, she would have been truly something back then, and of course she was soon noticed by the rest of the crew at her chosen work place. The person doing the noticing that most attracted her was the Gallic looking one, the one working the stove. It was the way he ogled her when in turn he thought she wasn't looking – but she was, and her radar was up. The nights went by, the frisson increased between them, but there was no approach on his part. Being Australian, Susie wasn’t backward in coming forward, particularly when there was the possibility of a new beau to be had. One night she made sure he couldn't ignore her any more, and she found that Daniel was more than comfortable with that. It all developed speedily after the ice breaking. In no time they were lovers shacked up together – and it was blissful. They explored each other and they explored Southern England in their rare times off. A couple of times they took the ferry to the French coast, and once spent a weekend in Paris, his neck of the woods. They were the best of pairings – deeply in lust, deeply in love. Then all too soon her time was up, her visa had expired and it was time to return to Oz. He escorted her to Heathrow. The parting was fraught, but he made passionate promises to her, she back to him.

Of course the 'rom-com' impediment in this tale was the tyranny of distance. They wrote fervently, religiously to start with, but it soon all dissipated. When she met someone else, missives ceased altogether. That someone else she married and had kids by, but this relationship had also petered out by the mid-nineties.

Social networking was in its infancy then, but she found him. She knew from one of Daniel’s last communications that he had returned to Paris, and emails flew through the ether between Sydney and the city of love. He had a similar story – marriage, kids, divorce. Emails devolved into expensively long phone calls, and, as we know fortune favours the brave, and our Susie was not one to die wondering. Ever overt, she asked certain questions and ascertained there was a possibility of re-ignition, so again a plane took her to Europe. She had to know if there was still a spark, and very quickly discovered her instincts were correct. She proposed a return trip by him to her neck of the woods, and he wasn't uncomfortable with that notion either. He promised to visit her in Oz as soon as he tidied up 'a few loose ends’, and this time a promise held up.

It was then, in the Outback, our paths crossed. She informed me that the Parisian spark had turned into an Aussie bushfire; that the 'silver lining' was within reach. But my radar was also out. I had my doubts. Despite their canoodling and her enthusiasm, he was very reserved in talking about it. Perhaps he was simply tired. Or maybe he felt submerged by her volubility; perhaps it wasn't as straightforward for him as it was for her. His English was fine, so it wasn't that, and I knew he had less than a week remaining in our country. I was uneasy about it all

As we drove on northwards into the night our conversation faltered, and then ran out of steam completely. I drifted off to sleep. When I awoke we had pulled into our Alice terminal, and the seats opposite were empty. As I stepped off the bus and thanked the guides, I looked around, but there was no sign of Susie and Daniel.

Had something happened whilst I dozed? Had they argued, had he come clean? If all had been okay, surely they would have wanted to say goodbye? Of course, my small regret is obvious. I now had no way of knowing if their, or perhaps more accurately, Susie's, chase for a silver lining had that Hollywood ending. Had my worst fears been realised? Had it all foundered in the real world where Hollywood fears to tread? Since watching SLP, it has been gnawing away at me, ever so slightly.