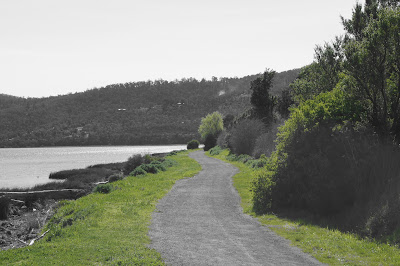 His lined, leathery face cracked a smirk, 'If you knew, cobber, how many copperheads are in the bullrushes along this track, you wouldn't be walking down 'ere, 'specially if you'd be scared of 'em. Me, it'd take more than a few Joe Blakes to put me off!'

They put me off though – they give me the heebee-jeebies! And unpleasant nightmares! I
had just passed a smallish one lying inert on the fringe of the path by the river. For all I knew it may have been dead, but I wasn't going close enough to find out. I had thought to warn the sprightly old man about to pass me in the opposite direction, but how he responded was definitely not what this fellow walker wanted to hear. Australian manly men weren't supposed to be afraid of the blighters, but this one was petrified of them. Give me spiders any day!

At the end of my street, and flanking the Derwent on one side, and a rail line on the other, the track headed upriver towards New Norfolk. It had been a feature of my daily routine for years – and note the word 'had'. It was my concession to a modicum of fitness in my post half century years. I knew my increasingly flaccid body had long lost whatever sheen it once possessed, but at least I was going to fight off further deterioration, so off striding I did go. In truth I enjoyed it. The river possessed many moods, its water fowl were endlessly interesting and each day I held out hope for a rare glimpse of the magnificent sea eagle that very occasionally, regally, cruised air currents above.

This had been the case ever since my DLP (Darling Loving Partner) had moved to the rurban edge of our island's largest city ten or so years ago. For most of that period I was resigned to being just a frequent visitor, my job pinning me to more northern climes. Only this year has that changed with retirement. Forever a recurring bad dream, though, has been the predicament of discovering a copperhead or tiger in our yard or, worse case scenario, seeing one slithering into some nook inside our abode. I know I'd be the more likely to be perching on a table and screeching than my DLP, who would no doubt calmly seek the assistance of the manly man next door, far more versed in dispatching slimy intruders than I could ever aspire to. Not for me would there be marching into confrontation with rake or other implement for dismemberment – my DLP knows me better than to expect that!

A caring friend, concerned with my tales of track dangers, fashioned for me a walking stick with which to protect myself, and for a while this imbued me with some confidence. It had not been a snake story that caused mate Keith to swing into action on my behalf, but another denizen of the river foliage. One I had felt to be benign, in fact downright beautiful. On the day in question I was peacefully perambulating along, lost in thought, when I espied up ahead a clutch of tiny cygnets, on the opposite side of the pathway to the river. 'Strange,' I vaguely thought to myself. 'I wonder where their mother could.................'

Just then there was a frenzy in the bullrushes, and out of its sanctuary charged a very irritable mother swan, emitting high pitched squawks, wings flapping menacingly, neck outstretched to the max. The beak, wide open, was directly aimed at my nether regions. With, I thought afterwards, considerable presence of mind, with nothing clutched to offer any defence, I lunged post haste to the railway embankment alongside, and desperately started scrabbling up it. What an edifying sight that would have presented to any spectator – a buffoonish elder citizen frantically trying to claw his posterior away from an irate avian's snapping bill. I reached the safety of the railway line and regained composure. Mother swan calmed down after checking no harm had befallen her brood, then shepherded them back to cover. My view of swans is now changed forever, but Keith had made sure I would never be so exposed again - for now I possessed......the stick! With it I was more than a match for whatever dangers lurked beside the waterway, or was I????? 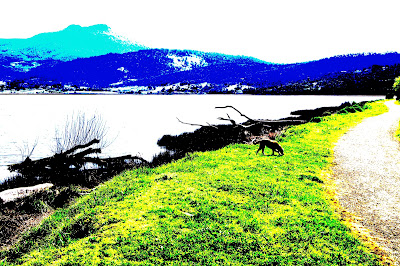 Back up north my walks were far less fraught for I had another protector, one surely equal in potency to............the stick – a dog. Not exactly a fearsome creature, I nevertheless felt secure with my son's adorably nutty, mega-excitable pooch, Oscar. This personable canine cherished a walk and would gyrate himself to a lather with the merest hint of his lead being produced. My attempts to attach said lead to his collar, whilst he engaged in orgasmic frenzy, exhausted me even before we set forth outside the gate. After a hundred metres or so on Oscar's madcap dashes to right and left would abate, and the remainder of our journey would proceed in relatively peaceful placidity, at least until.........

We both knew the route of our tandem team event by heart. Down by the bush bordering the primary school grounds Oscar would liven up in the same manner as I did approaching the smell of good coffee, but his nasal orifices would be tingling with the scent of rabbit and wallaby instead. After completing our skirting of this, the cocker spaniel by my side would quieten as we continued our reverie, only to become inordinately tense as we approached the one particular house indelibly etched into Oscar's synapses – the home of Attack Cat. Now most felines would arch their back and hiss at a curious canine, but not this feisty tabby. Oscar would proceed to scan the garden, all a quiver. If mutual spotting occurred, it would go like this. Attack Cat would do just that – charge helter skelter towards my dog's inquiring proboscis, claws and lethal, if tiny, teeth bared, an agitated exocet of fur and fury. Oscar would send high pitched yelps into the ether whilst backing away with alarmed speed. At the fence line the cat could proceed no further, which our heroic faux-mastiff took to be his victory, causing the expelling of a triumphant brace of he-dog woofs, and with his head raised considerably higher, Oscar would lead the way home. I loved our walks together up north, but I awaited the final nail for similar down south!

The continuation of my exercise routine there was not aided by the leaping copperhead. I had no notion that snakes could throw their whole bodies into the air until another unnerving occurrence. On this occasion the grass fringing the track was longish, so I had not spotted it beforehand - but as I passed I sure did. Out of the corner of my eye I caught this big reptile throw its whole body into the air. Thinking it was on the attack I raised the stick to head height before realising it was falling away from my bare legs, not towards. It also was patently plain to me that had it been doing the latter, there was no way I'd have had my protective weapon down in time to prevent a strike. I could see the writing was on the wall – I was spooked!

Then there was the lurker. I spotted him up ahead on yet another day, bent kneed, darting from bush to bush. I was puzzled at this, and by the fact that, having spotted me, he made a dash for the Boyer Road on the other side of the rail tracks. As I rounded a corner the penny dropped, for approaching me was a slim young lady out on her late afternoon run. Thinking back now two questions come to mind – did my presence that day prevent something unpleasant befalling that unaware jogger, and was the lurker the same gutter grime that caused the following headline in the local newspaper:-

Yes, it happened on my walking track a short time after my brief encounter with the lurker. The victim was knocked to the ground and his wallet stolen. I never carried money down the track, but a signed pinned to my back stating 'No Cash Held Here' seemed the only option to allay my fears, but was too ridiculous to consider. So a snake didn't cause the cessation of my ambling, nor a frightening, protective water-bird, but a low life human.

And the connection back to Oscar. Well, I am not happy with myself over all this, and I don't think that subliminally it's that I feel my body is beyond all help. I do think a dog would assist, give me a purpose as well as providing a deterrent. And if perchance my DLP reads this, no my treasure, it is not a plea to have an addition to our household. I know it is totally impracticable and I wholeheartedly concur with your feelings on the matter. I also know Oscar and I will continue to have adventures each time I revisit the north, and I trust Attack Cat remains around to add spice to them 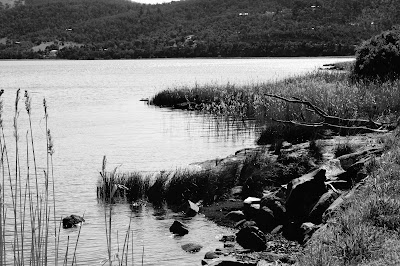 All you need to know about Tasmanian snakes = http://www.wildlifetasmania.com/images/Snakes.pdf