It struck a chord when the reviewer of this book for Melbourne’s ‘The Age’ newspaper, Raymond Evans, cited that the main street of a Queensland provincial town was derived from an Aboriginal word meaning ‘plenty dead’, being close to a site of frontier violence where the First Australians came off second best. It reminded me of how incensed I was when I discovered, through reading James Boyce’s fine history ‘Van Diemen’s Land’, that the main street of another provincial town, one in which I had lived in and taught for a while, was named after an official of a large colonial agricultural concern. It was revealed that this fellow had callously murdered an Aboriginal woman on a Circular Head beach, but of course a subsequent investigation exonerated him of any wrong doing. At least there was an investigation! I now realise that perhaps the Sunshine State’s Bundaberg and my own island’s Wynyard would only be two of a number of many former frontier communities with similar provenances for the nomenclature of suburbs and streets. 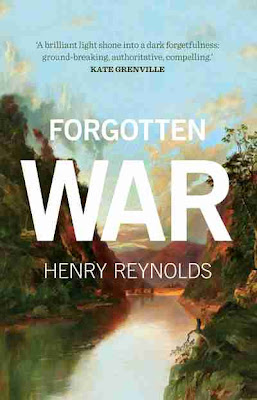 In another unrelated column in the same former broadsheet, the always readable columnist Stephen Wright recounted the tale of the brief but vicious Eumeralla War in the lava lands of Victoria’s south-west. Here native clans, led by warriors with the anglicized names of Jupiter and Cocknose, put up stout resistance before being quickly wiped out by a force of the colony’s mounted police in 1844. Of course Tasmania’s own earlier Black War is well documented. This conflict and other factors decimated the original inhabitants. Along with the ‘convict stain’, our country’s frontier struggles have been neatly pushed under the carpet of our history for a very long time. The former now seems to be a badge of honour. The turmoil on the fringes of advancing white settlement, in contrast, although well recognised for much of this nation’s first century, disappeared from sight in the second. Reynolds has been largely instrumental in pulling this story of imperial war back into the nation’s consciousness, for all, in the third.

Reynolds first came to my attention as one of the talking heads in the illuminating SBS series  ‘First Australians’ – and he does indeed have a very fine head for television. His manner and mode of speech carries with it a certain gravitas indicating one would be foolish to doubt his views. He was equally impressive in the launch of ‘Forgotten War’ at a Hobart bookshop recently. 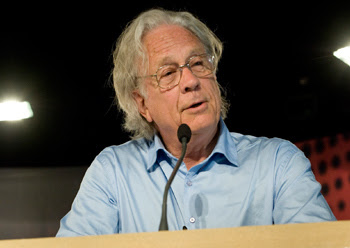 Looking back, when we tally the figures provided by notoriously unreliable contemporary sources for the amount of death and mayhem caused in the frontier war, the approximate number of twenty to thirty thousand casualties make these times the equivalent of the Indian Wars of Wild West notoriety. It seems that Australia did not miss out on a conflict in which an imperial power, with superior armaments, defeated and subjugated an indigenous people. The question Reynolds ponders is whether or not the combatants of the time actually regarded what was happening as ‘war’. Reynolds leaves us with little doubt that, from the colonial administration down, they did. He enlists much historical notation to prove his point. This was no quick victory though. In many areas the locals did not put away their spears and waddies easily; organising opposition to the invaders that lasted right through till the 1930’s, only twenty years before I entered the world. That is a sobering thought. No state or territory was spared. There has been a ‘great Australian silence’ on the matter, but now the ‘whispering in our hearts’ has been frog marched out into the open. We finally have made a start on putting these matters to right, but I doubt that in my lifetime names such as Pemulwuy, Mosquito and Jandamarra will be as venerated as those of Monash, Morshead and Blamey.

Australia is an unusual country in that it takes as ‘its coming of age’ a military defeat on a far away foreign shore, as well as its national day being the moment the country was invaded, leading to another defeat; that of our native peoples. In my view, neither event is something we should be inordinately proud of – but if one is seared into our collective consciousness, it is only right and proper that so should the other. Henry Reynolds is doing his bit to ensure that happens.