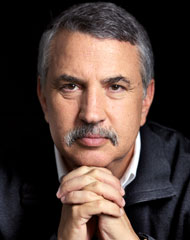 Thomas Friedman
'Bing on the Marathon, We Will Not be Cowed.' thundered the headline of a think piece, penned by a New York Times opinion shaper from his stately skyscraper podium in the Big Apple, to his shell- shocked devotees, shortly after the twin blasts in Boston. 'Americans don't frighten easily any more,' he continued with bravura, and 'We tracked down Osmara bin Laden....and we'll do the same in this case.' Well he was right on that score, and to the country's credit. It was just the jingoistic call to arms that white bread America wanted to read over their bagels, as Thomas Friedman, the NYT scribe, urged his countrymen and women '...to start training for the next marathon tomorrow.'

Of course there is much that is commendable about the US of A and their response to another unthinkable homeland crime. There is much that is commendable about Americans in general. Their nation is led by the very finest of Presidents – humane, erudite and not noted for knee-jerk reaction. What was instructional, watching the footage of the immediate seconds after the blast, was that as many bystanders went running towards the affected areas to give assistance, as went the other way. Many of the latter were clutching loved ones, getting them to safety – wherever that was on that bomb-fraught day.

I have much regard for Timothy Boyle, as a part time member of Friedman's profession, and because he is former fringe Hawthorn AFL player. He produces occasional scribbles for 'The Age', but his star certainly does not shine as brightly as his American counterpart. But I was impressed with his nuanced piece on the same disastrous event this weekend just past. It centred on Carlos Arrendondo, one of the first to react and start treating those indescribably injured by the blasts. Like the Tsarnaev brothers, he had benefited from the largesse of an essentially big-hearted nation, which is, in the main, welcoming to outsiders seeking to improve themselves. His heroic life-saving actions are the antithesis of the backpack toting execrable duo – and it could be considered he had even more reason to be anti 'the home of the brave' than the youthful 'terrorists'. He had lost one son to a sniper's bullet in Iraq, and another to suicide. No, he loves his adopted country, and cheered the runners on pre-bomb, holding up for all to see an image of his lost sons. This saddened man could see there was still much that was commendable in 'stars and stripes' land. 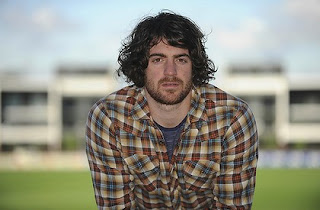 Timothy Boyle
But why is it that so many, both within and without, desire to damage the self appointed defender of global democracy. We can point to the rampant gun culture and those Hawks – no, not my beloved footy team - but those 'good ol' backroom boys who still pull so many strings in Washington. But behind all that there is Hollywood. I blame Hollywood. Those Hawks follow the' tinsel town' line, along with so many of their countrymen, as do we, by default – they follow the crass propaganda crap that the film industry dishes out. It is taken as gospel and believed.

In the parlance of the film-making gods, for Yankee good to win out, there has to be an enemy, the bad guys – and Hollywood, as with some Presidents (Axis of Evil anybody?), is not backward in coming forward and pointing the finger as to whom they may be. They've been doing so right from the get-go – remember those dastardly dogs, those forever scalping Red Indians. From there the list went on – Mexicans, British, Spanish, Germans, Japanese, Russians, Chinese, Koreans, Cubans, Vietnamese, Muslims, Taliban. There is little nuance here. Multiple gun bearing, wise-cracking, gum-chewing and invincible – the All American hero – Tom Cruise, Bruce Willis, Stallone, even a state governor – would give them their just desserts with overkill of high body count, and daring do. Many would dress in ridiculous comic book costumes to do so, or spray machine gun fire with naked, sweaty, six-packed torso to the fore.

As the Korean Peninsula teeters on a nuclear knife-edge, what does the world's movie capital do? Why it dredges up another toilet of dross called 'Olympus has Fallen'. Somehow the North Koreans have magicked themselves to be capable of destroying the White House and kidnapping the President. That is, until Gerard Butler saves the republic. And you think Kim Jong-un is just not mad enough to take offence and press the buttons?

How do you respond when you lose a son to idiots with bombs? The little lad, Martin Richard, who lost his life that Boston day has, rightly, become a symbol of a terrible event and captured the hearts of all his country-people. Consider this as well. How do you respond when an unmanned flying object takes out the life of your son or daughter from above, in our transition to war at arm's length? For the people at the consoles this is merely 'collateral damage'. To the best of our knowledge around 4700 Pakistanis, Somalis, Yemenis and diverse others have perished in this way, many just going quietly about their daily tasks without a sinister thought in their heads. 176 of that number were children. If one or more were yours, I reckon you'd soon have a few sinister thoughts springing to mind. They, maybe, would centre around which country operates these 'weapons of mass destruction.'

Obama, for all his fine qualities, has not stopped the drones – vital to war on terror you see. He is also seemingly incapable of toning down the nation's gun toting culture, despite attacks on schools, cinemas and shopping malls. Since the attack on Sandy Hook Elementary, 3587 Americans have lost their lives to guns. And despite this continued rampage, those back room Hawks, with no little assistance from the gun lobbyists, and with numerous Republican pollies in their back pockets, are really the ones who are invincible here. In Oz, for all Howard's destructive politics, he gave us peace from that at least. In the US far more young people have been slaughtered by armed neoliths than terrorist bombs. And I wonder just how it will pan out now that American scientists are actively developing 3D printers with the capacity to make cheap weaponry – will that also be acceptable to the pro-gun lobby as every American's right? From there, home made bomb production for every deluded teen, will just be a doddle.

And which American President was it who stated, 'I don't know why, but an American life is worth more than any other?' Can you guess?