A Hunting and A Snooping

Speaking as an ex-chalky, teachers are just not sexy. We cannot compete on the small screen with policemen who always solve the crime, forensic experts who always solve the crime or seers who, yes, always solve the crime too – even if there’s a fair bit of detective work as well involved in the care of pupils. A few in any cohort are as cunning as any master criminal. When was there last a decent series on tele about my former profession? The most recent I can remember is the eponymously named ‘Teachers’, a fine Brit production, but that was a while ago now.

On the big screen we fare a little better, and it is possible, as your scribe enjoys doing, to come up with a ‘Top 10’ list, just - of best teaching movies:-

Not too many of the above, though, have produced heroes to get your juices flowing, although my DLP (Darling, Loving Partner) reminded me that Indiana Jones was a lecturer as well as an adventurer, if that counts? Last year I was looking forward to ‘Monsieur Lazhar’, but it was disappointingly unrealistic.

2013 is looking better. To date I have visited the cinema for two movies with central characters as teachers – one of which was quite excellent, but neither were ‘feel good’ in the same way as many of the listed.

Scandinavia is punching above its weight these days on both sized screens, in particular with Scand-noir crime procedurals – there’s that trilogy, ‘The Killing’, ‘The Bridge’, ‘Wallander’ and the glorious ‘Lillyhammer’. ‘Borgen’ is great political drama for television with ‘Kon Tiki’, ‘A Royal Affair’, ‘Headhunters’, ‘After the Wedding’ and the sublime ‘As It Is In Heaven’ some notable recent success stories from that neck of the pine forests in movies.

‘The Hunt’ carries on this trend. This Thomas Vinterberg directed feature is also very noirish and involves a purported crime. It showcases an extremely fine performance by ‘Mr Everywhere’ Mads Mikkelsen, as Lucas, an early childhood teacher accused of every teacher’s nightmare, interfering with a young student. This should be recommended viewing for any would be classroom operator, particularly any male contemplating the primary area. Males are sorely needed in these formative years, but society’s obsession with the lurking pedophile is killing off the supply of positive role models operating with the very young.

Lucas has had a rough time of it lately, but is finally getting his life back together when the unthinkable happens and he is falsely ‘sent to Coventry’ by a small village after a young student’s confused claim. Of course the girl is believed and there is no chance of ‘innocence until proven guilty’ with a presumed deviant. He attempts to stand his ground with disastrous results for him and many he comes in contact with. Gradually the pendulum swings and he is absolved, but is he? A hunt in the forest, thus the title, is a rite of passage in Lucas’ village – and all is not as it seems!
This movie features bravura acting from Mikkelsen, with a strong supporting cast. I particularly liked Alexandra Rapaport as his torn new found love. Seeing Lucas crash to the bottom of the abyss, and then with the aid of a couple of constant supporters, clawing his way back out of the darkness, makes for mesmerizing cinema going. 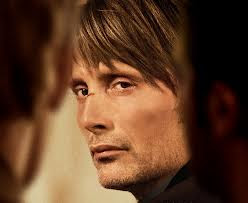 Less successful an experience to my mind was ‘In the House’, coming from the formidable Francois Ozon, whose previous directorial efforts – ‘5x2’, ‘The Swimming Pool’, ‘8 Women’ and ‘Under the Sand’ I have thoroughly enjoyed. This is not in the same league, despite its fine array of acting stalwarts. Jaded Germanine (Fabrice Luchini) just goes through the motions in his job as a French literature ‘professeur’, until he becomes obsessed with a student unusually actually displaying some talent with the written word. Young Claude (Ernst Umhauer) is a stalker, in turn obsessed with his ‘best friend’s’ family – particularly the mother, played by Emmanuelle Seigner. He snoops around this family’s home, catching glimpses of intimacy and hearing secrets. He writes up his adventures in the form of homework assignments for Germaine, who cannot get enough of them, being sucked in by such Shakespearian prose such as ‘I left my friend’s bedroom and on passing a closed door I immediately caught the singular aroma of middle class woman’. He takes to giving the young man extra tuition and even involves his wife (Kristin Scott Thomas) in his absurd machinations. So, when the mother proves elusive to the young man, guess who becomes his next target? Lucas in ‘The Hunt’ comes out a saint compared to the devious Germaine, but unfortunately the film becomes too clever by half, so by the end of it the audience, or at least this part of it, has little notion as to what is reality and what is ‘fiction’. 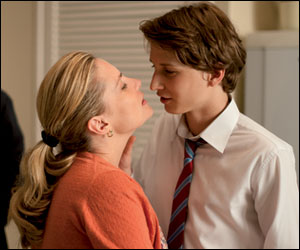 Interestingly this movie was rated MA, as was ‘The Look of Love’ viewed earlier in the same week. Whereas there was a brief fairly chaste sex scene in ‘In the House’, the latter was jammed full of sex and copious nudity! That left me somewhat nonplussed. Perhaps the passionate kissing between Seigneur and the lad was the issue.

Thankfully my time at the chalkface was free of any of the issues that tainted the careers of both teachers in the two films – but they do display the darker side of the profession which is constantly and increasingly present. It would have taken one innocent slip up, or one former student out for revenge and/or monetary gain, with the result that there but for the grace of She up in the sky go I.