There is no way I want to be like Ali. Hopefully Ali is the complete antithesis of me. But I found him mesmerising – just as I find Dan Draper or Hank Moody mesmerising – that does not mean I want to be the type of men they are, at least not in totality.

Ali is a big, brutish being in his powerful pomp. He is the unlikeliest of romantic leads. Lumbered by his five year old son, who by some means came to him after being a drug courier in his mother's care, Ali is a frightening father figure to whom, initially, his son cannot find it in him to be affectionate towards – understandably. When Ali encounters hard times he imposes himself, as well as young Sam, on his sister and her husband, battling in struggletown themselves. In his hustling Ali gives a totally different view to the glamour and glitz of the French Riviera. We catch glimpses of Antibes that would appear on no tourist brochure. 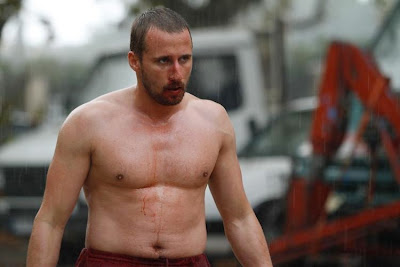 Ali is the chief male protagonist in 'Rust and Bone', the amazing construction of director Jaques Audiard. Although Marion Coitillard has garnered most plaudits for her courageous role as Ali's partner in sexual activity, she is greatly assisted by some cleverly generated CGI, which I found not wholly convincing – to me her stumps did not look ‘real’. This is the only flaw in this tale of unlikely love, and we'll get to those stumps later.

Unusually for a relationship movie, despite Marion's truncated assets, for me it was her fellow player, Belgian actor Mathias Schoenaerts, who stole the show – a performance that has not gone unnoticed by Hollywood. After 'Rust and Bone' we may get to see more of his hulking torso up on the screen. Hopefully, in real life, Schoenaerts would little resemble the Ali he portrays in character, particularly in his treatment of the opposite gender. For him, until Coitillard's Stephanie unearths a kernel of sensitivity, woman are there merely to satisfy his primal urges in the most basic, animalistic manner possible, and then to be disregarded quickly. There is no emotional connection in his sexual predation, and in it this aspect of life his sheer brute strength is to the fore, as it becomes in the crude underground sport he takes on to earn a tidy sum – street fighting. Bare knuckles, anything goes – he pummels his opponents into bloody submission. It is difficult, at times, to watch when he is in action in this pugilistic ‘art’. But, as it turns out, it becomes a vital cog in his softening.

Stephanie becomes a double amputee as a result of an accident involving, of all things, an orca. Her reconnection with the beast that crippled her is as moving as it is beautiful - worthy of the admission price for that scene alone. Because of an earlier encounter, she turns to Ali as her carer, then 'fuck buddy' (in order to discover if she still 'has it'), and, finally, the relationship becomes something somewhat more. The film does enter Hollywood territory a tad at the end, but is none the worse for that.

There are undoubtedly men like Ali out there, at least the Ali before the Stephanie induced redemption. Are they so redeemable in the real world – I wonder? Some, with their bullying, aggressive overtness, backed up by zilch in the compassion department, have little in the manner of intelligence - if street wise, rat cunning is discounted. We read of them in terms of road rage, rape in suburban Australian streets and hideous acts on Indian buses. Heavens only know what these ogres are like towards their women folk in their own homes. I've seen the embryo of this acute misogyny in the schools I've taught in, thankfully in minority numbers, and worked towards moderating it in my teaching. Some of the events I've witnessed in the bogan suburbs near where I live increase the shame I feel of my gender. I abhor the numbing thuggishness of many a male.

‘Rust and Bone' is a fine, fine film for the performances of the two leads portraying, firstly, Ali, the dolt, who came to see a different way; and then there is Stephanie, his fractured guide. Ali proved his behaviour was not rusted on, but I suspect for every Stephanie who succeeds in reshaping their men, there are double the numbers who simply receive bruised faces, and shell-shocked minds, for their trouble.

An Interview with Mathias Schoenaerts =http://tmagazine.blogs.nytimes.com/2013/03/08/good-morning-matthias-schoenaerts/
Posted by Unknown at 17:24