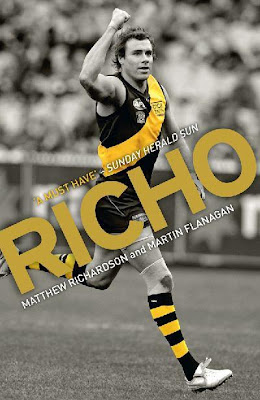 Tonight it’s ‘Dreamtime at the ‘G’ – a game of football – a game of Aussie Rules footy to be exact – that is as almost as significant as a game can possibly be in our country. Only the ultimate contest of the year and the Anzac Day match can rival it. Within my mind, at least, the other two occasions struggle to do so. For the Dreamtime match celebrates the culture of the First Australians, and specifically their immense contribution to the game. This includes, with marngrook, the fact they more than likely invented it. This significant event on the AFL calendar is always played between the Essendon Bombers and Richmond Tigers. It is epic in proportion as it is epic in meaning.

Aboriginal footballers bring flair to a game that, these days, is often accused of blandness – but not when these fellows are on the ground. Their individual feats, their magic, bring the punters to the games in droves. Where would the mighty Hawks be without Franklin, Rioli or Burgoyne; Essendon without Ryder; Carlton without its mosquito fleet of Betts, Yarran and Garlett? North has Wells and Thompson, the Eagles ‘Nic Nat’ and on and on we go – the aforementioned players being only the tip of the iceberg. Then there are the black heroes of the past – Polly Farmer, Syd Jackson, Michael Long and, again, on and on we go.

This week has also been particularly memorable as it is the twentieth anniversary of an amazing photograph – the sporting equivalent in the story of reconciliation in this country to the iconic snap of a Prime Minister pouring red Wave Hill sand into the hands of Vincent Lingiari. Of course this is image of St Kilda’s Nicky Winmar, pulling up his jersey, pointing to his skin in response to the rabidly racist brayings of Collingwood supporters after his team defeated them at Victoria Park. It symbolised the distance between our nation’s two cultures – the imported one contrasted with that that has been here as long as the stars of the Southern Cross. It also stands for the first steps taken to close that divide. A president of the same team that opposed Winmar’s on that day reflected soon after, that he had no problem with indigenous players, as long as they behaved in the same way as whites. So it is all credit to the Magpies how the racial slur inflicted on Swans champion Adam Goodes was handled. To see television coverage of Eddie MacGuire charge into Sydney’s rooms immediately after the game to apologise to the Sydney captain demonstrates how far we have come in our collective thinking after two decades. Then, as we all know, Eddie undid all this with some imbecilic attempt at humour at Goodes’ expense on his radio show. To the Swans’ credit is the fact that he named – or at least pointed – and shamed. The photo of him doing so may, in time, become as significant the Wayne Ludbey image of two decades ago. 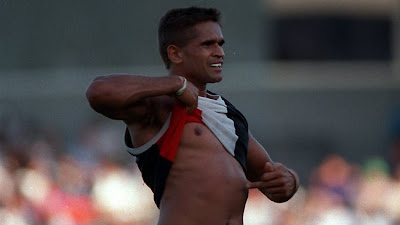 Front and centre celebrating ‘Dreamtime at the ‘G’ and the Essendon great’s Long Walk, this weekend just past, were the sporting columnists at ‘The Age’ newspaper. Carolyn Wilson, their doyen, wrote of the quiet work that is going on behind the scenes at Richmond and Port to eradicate the continuing blight of prejudice, based on colour, from the game. Gary Lyon told tales on his former Melbourne teammate ‘Wizard’ Farmer; with Martin Flanagan scribing of the importance that a ‘war dance’ has become to the culture of indigenous teams before taking on the opposition.

Throughout this journey, in recent times, our First Australian players have moved from fringe curiosity in the game to mainstream stars. The last listed journalist, Flanagan, has charted the course, in very readable layman’s terms, through these years. He is still able to do so in language that graces and glows. He’s been to their homelands and he has introduced us to their practices - often strange to whitebread Aussies. By the time a particular column is devoured, as a result of his insight, the strange becomes positively logical. One just has to come at it in a new way. He has enlightened on the magic, unpredictability, passion and humility of the Aboriginal footballer. But each of those adjectives could equally fit a gangly, left field individual that came from the fecundedly green pastures of Tasmania’s North West to grace his old man’s team, the Tiges.

It was only fitting that the writer chosen to chart the course of this loved, impetuous player’s rise to champion of the game status should be the same Martin Flanagan. It is a non-linear account, not a hagiography – more of a lament that we may never see his likes again. This being stated, it seems his successor at the Tiger den, fellow islander ‘Jumping’ Jack Rievolt, is heading some ways towards ‘Richo’ status. Matthew Richardson, on field and off, wore/wears his heart on his sleeve, often receiving copious brickbats as a result. A couple of his supposed tantrums have been falsely lifted to folkloric proportions.

For this particular reader a secondary joy of the book were the chapters on the local football of my neck of the woods - of that fertile north western coastline of my island to the south of AFL city. This is where ‘Richo’ had his start. It was also Flanagan’s old stomping ground - thus seeing him weaving tales of some of its legends – ‘The Doc’, (Darrel Baldock); ‘Gypsy’ Lee and our hero’s own father, Alan ‘Bull’ Richardson. Back in the day thousands would flock to see Burnie take on Cooee, or Devonport (‘Richo’s’ team) play their cross river rivals East. Although my island still produces champions, sadly local football is just a shadow of its former self, being victim to the digital pulling power of AFL.

Martin Flanagan’s writing is, as always, full of nuggets pure joy to peruse. When a former teammate of the champ, Wayne Campbell – an interesting fellow himself – is asked to comment on what it was that made ‘Richo’ so unique, his simple but telling answer was ‘Tasmania’. This leads the author off to riff on that notion. Perhaps the game’s greatest eccentric, Brent ‘Tiger’ Crosswell came from the island, and there are many more from here cast of a different cloth. You can see it in the way Mitch Robinson canons around a ground, the way Jarrad Waite still employs the Glasgow kiss in this oh so politically correct day and age – and they are just the Taswegians in one team! Then there was Johnny Greening, a contemporary of mine at a Burnie high school – what a legend he would have been had he not been cut down in his prime! And, to please this reader, Robert Murphy gets a chapter to himself, even if he is neither Tasmanian nor a Tiger.

As much as crowds loved ‘Richo’, it seems opposing players had a similarly high view of the man. As relayed by Flanagan, they are glowing in their tributes for, as bewildering as he was, only an Eddie Betts goal celebration could come close to his sheer visual enjoyment of the game when on song. That ‘Richo’ now has a successful media career is a fitting postscript – it would be sacrilegious if this man was taken from our view.
One does not have to be an aficionado of the Richmond Football Club to be enchanted by this tome. I wear my brown and gold heart pretty proudly, but the Hawks have never produced anyone remotely resembling this lanky, seemingly uncoordinated, powerhouse of a forward. When he was shifted up the ground in the twilight of his career, at odds with standard practice, we all finally realised just how athletic the big man was. I loved this book. Flanagan doesn’t have to present ‘Richo’ as larger than life. He simply was/is. If you adore the game, please take on this rapturous, riotous read. You will not regret it. 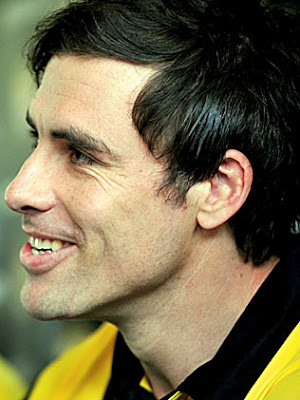