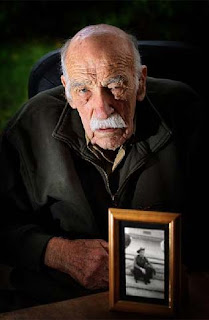 Arch Flanagan passed away during this last week. He was 98, an innings any Aussie cricketer would love to attain these days. I never met him, but I knew him quite intimately. His son, Martin, had been eulogizing him for several decades in his Age columns. I met Martin for the first time a few weeks ago when he was down for the local writers’ festival. Looking back, I wonder if that was the last time Martin would have talked to his dad before he crossed over.

Like my own father, Arch was of the war generation – a breed quickly, too quickly, diminishing. Arch’s death, and it being the week of Anzac Day and all, caused me to ruminate on my Dad. He had a kinder war than Arch, if that isn’t an oxymoron. Unlike many, my father, Fred, spoke of his war often during my formative years – but he spun so many tales it was hard to know how much of a nub of truth there was in them. He suffered no war crime as Arch had to tenuously endure, but he carried enemy shrapnel in his body till his dying day, over three decades ago now. As with Martin, a brother made the call to me to let me know his time was almost up. Unlike Martin, I was in the last weeks of an extended European sojourn, so I had plenty of time to reflect on that Q-bird coming home. I made it in time to be by his side for his final breaths. He hung on for that. Martin’s childhood memories of his dad were of a sick man, a legacy of the indignities inflicted on him in a Japanese prisoner-of-war camp. Yet he almost reached his century. Of my Dad, I recall a robust, hale, larger than life personage – but he was a man who worked his body hard over most of his sixty odd years.

Before the final vigil, my brother took me to a Hobart pub – I have no idea which now. There he introduced me to one of the loves of my life. We were drinking ale as we, I guess, reminisced. It would not have been ‘tears in your beer’ stuff, but it probably became profounder the more amber nectar we tossed down. At some stage Kim suggested we follow each lager with a chaser – of the whisky kind.

Now Fred was also a beer drinker. I cannot remember him partaking of scotch, but it seems there was always a bottle of Johnny Walker Red floating around the house. At some stage during my teenage years I must have sampled the stuff – and I thought it was revolting. So harsh, burning and vicious. ‘How could anyone drink this hooch?’ I probably inwardly exclaimed – or words to that effect. And I never did till that sorrowful prelude. At least not raw, or ‘on the rocks’, as I imbibe it now. Maybe I may have had it adulterated by some cola – a travesty now. So it is surprising that I consented to the brotherly invitation. But probably jet-lagged, emotional with the knowing that my father was not long for this world, my defences were down and I acquiesced.

What my brother passed to me on the rocks was totally different to my bitter recollection. I’ve no ideal of its branding after so many decades; but now it tasted, to my probably more mature palate, of a heavenly mix of the waterlogged peaty bog and misty air of its Scottish or Irish provenance – and I was hooked. Every time I nightcap with a Glenffiddich, I give thanks to a brother on that day way back when.

Do I miss my Dad? That is a given, but his genetic legacy is all around. I see it mostly in that same brother. I remember my father’s hands, and Kim has those same hands. It is not the physical similarity I’m writing about, but he too possesses hands that can craft. He can make what is conjured in his brain come to life through his hands. As I have taken to trying to make comely words flow seamlessly together in my retirement; my brother, in his, has taken to constructing ukuleles. As objects of beauty from this island’s unique native timbers, they’re as exquisite as they are, no doubt, tuneful. The gene for these inherent skills passed me by, but I think in part my ability to teach came from father Fred. He could take that nub of truth, spin it in liberal concoction and weave it into plausibility. Martin Flanagan has that gift, and it is much akin to what I attempted to do in the classroom, particularly in the teaching of my nation’s history. Take a random nub of historical fact and make it into something that would engage minds resistant to the un-now, dry boredom of century old events. Who wants a military defeat on the shores of a country so foreign rattled on about year after year. The average student couldn’t give a toss, as in the end, I couldn’t give a toss if I never covered Gallipoli or Federation in any ‘curriculum’. To me the important thing was to reel them in on history – just as my Dad hooked me in so long ago with tales of wartime daring-do.

Old Arch could look to the literary success of his two sons, and, just as Kim and I are chalk and cheese in many aspects of life, so are, it seems to me, Martin and Richard, even if they get confused in the minds of many. If Winton is a benchmark of sorts, then Richard would come in higher, and Martin somewhat below – and that in no way denigrates the latter, as I will explain. Richard has his wordsmithery polished to a warm, rich glow. He is a revered literary demi-god – a Patrick White for these times. ‘The Sound of One Hand Clapping’ and ‘Wanting’ are, in my view, sparkling diamonds of the writer’s craft. His shorter pieces have the power of logic that brook as indefensible any opposing view – particularly when on the subject of the environmental rape of this island he holds dear. Martin’s writings are, in contrast, akin to Ned Kelly’s rusted on armour. He is blue collar. He deals with the renegades, the footnotes of history, as well as, his brothers and sisters, the First Australians. And, gloriously, he explores and ponders on Aussie Rules. He is the Henry Lawson for these times. I would suspect that Richard would not take kindly to fools, whereas Martin would embrace them as from many a fool great nubs of tales have been forthcoming. It could be conjected that Martin’s great hero, Tom Wills, was one of the greatest fools of our history, at least at the end – but from that fool, as wrought by Martin’s prose, what marvellous yarns have been had.

Unlike Martin’s, my father did not live deep into old age. He wasn’t around long enough to see the happiness brought to me by a wonderful woman. How akin he would have felt to my book producing daughter, who proudly follows with passion the same footy team as her Dad. How approvingly he would have cast his eye over a fine set of CD shelves made for me by my son, with the same acute transference from mind-image to material via the hands, just as his grandfather and uncle were/are capable of. He would have delighted in the knowledge that grandsons played for local footy teams as he did down the Huon, and that some of both genders can power through the water in a manner he helped many attain through his self-taught coaching in his lifetime. He’d be proud that one, like him, was prepared to fight for his country. He’d adore all his grandchildren, as their gran still does – but I suspect, as with her, it would be Ben that’d be the special one. There is just something about Ben, the eldest of my youngest brother. My father loved electrical gadgetry and had wizardry with stuff that is switched on and off at power points, as does Ben; he had a passion for cars, as does Ben; and, like Ben, was just so generous in the sharing of his skills with kith and kin. And Ben has a certain twinkle in his eye as well as a laconic way with words that engages and disarms. He would have delighted Fred, so, yes, methinks there would have been a tight bond between Ben and my old man.

Martin will grieve in his own way for his dad and has already put pen to paper on the subject for his newspaper. And I grieved long for my father in my own way, as we all do for the lost ones we have loved. But in my brother, in my son and in Ben – in those ones in particular – his legacy lives on, as will Arch in the talented Flanagans. No doubt Martin will raise a glass or two of Irish froth or spirit to his dad - and now I feel like a wee dram myself.