The never-ending feud between Muslim and Jew over the rights to the Holy Land continues unabated. The result of this is tragic outcome after tragic outcome, with no winners – and it has been like this since the creation of Israel in 1948. It’s intractable and seemingly insolvable.

Occasionally, just occasionally, we get little glimmers of hope and trust between the sides – small nuggets probably, almost unnoticeable in the big picture – but they are there nonetheless. Suburban Melbourne is eons away from the surrounds of the Wailing Wall, but with the Muju team – get it; Mu = Muslim, Ju = Jewish – taking out the Unity Cup in 2012, harmony between diametrically opposed sides can occur. That competition to win the silverware is in the magnificent sport of Aussie Rules, featuring teams from the Yarra City’s polyglot of ethnic groupings. As is his wont, the Age columnist Martin Flanagan wrote beautifully of the culmination of the event in June last year. This occasion came on the heels of a combined Jewish/Muslim team from the Biblical lands itself, fighting it out for the game’s International Cup, part of the AFL’s intent in spreading our marvellous football code world wide.

Another infusion of the same hope, perhaps equally unexpected, comes with ‘The Other Son’ – a movie again where humanity supersedes intolerance. The basis of the film is not a new ‘what if’ idea - what if newborns are given to the wrong parents. Television series (eg US ABC’s ‘Switch at Birth’) and movies (eg ‘Mistaken Identity’, ‘The Town Went Wild’) have mined the potential mother lode of dramatic or comedic possibility in this situation previously, but I would argue, not with the same degree of sensitivity as this effort by French director Lorraine Levy.

In ‘Le Fils de L’autre’, to give this feature it its French appellation, a hospital evacuation is the reason for the mix up – an evacuation caused by where the film is set – in the cauldron of Israel’s ongoing Jewish/Palestinian conflict. The Arab baby goes to a Jewish home, and visa versa. This engaging film examines acutely what happens when the error is discovered much later, when the babies - two boys - become almost men. In the Israeli family a young Dylan lookalike, Joseph (Jules Sitruk), grows up the son of a serviceman and is about to embark on national service himself, thus the discovery. On the West Bank, the real son Yacine (Medhi Dehbi) has just returned from Paris to the adoring arms of his family, after successfully completing his baccalaureate. Then the bombshell hits.

The initial engagements between the two families are understandably fraught, but eventually there is a developing simpatico in the relationship between the two mothers, with the two lads in question, after their initial distress, becoming pals. The problems that do occur are with the two fathers’ refusal to accept, and the intentions of Yacine’s radicalised brother.

In the film religious tension is constantly palpable with gun toting soldiers present throughout, especially at the persistent check points. This casts an uneasy air over what is essentially a family drama. At any point the audience is given to feel that violence could intervene – and it does, but not from an expected source.

Levy had several possible options open to her as to how the film could pan out in the hotbed of distrust that is the background to her scenario, but she went down the same path the AFL Muju team trod. This is a heartfelt, quite lovely response on her part to the ongoing crisis in this part of the Middle East. It can only be hoped that people of import in this region get to see how two functional families have their worlds turned upside down. Through tolerance and patience, however, they reach a sane conclusion. If the angry men of the Jew/Muslim divide viewed this maybe their hard hearts would defrost a tad. The movie deserves all its garnered plaudits, so if it comes your way, give it a looksee. And, please, let’s trust that with more Muju Spirit in the world, ‘from little things big things may grow!’ 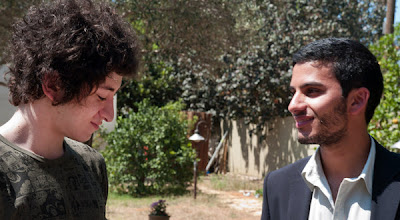