Not a One Horse Race

Back in February I was entranced by one of the first films I viewed for the year – ‘Silver Linings Playbook’. I then made the rash statement that it was ‘lay down misère’ – that SLP would be at the top of the list on the Blue Room’s Best Films of 2013. I naively felt that there certainly couldn’t be a better film this year than that perfect gem, could there? In Melbourne, shortly after, I watched the remarkable ‘Amour’. It was a masterpiece, but its draining sadness still had SLP in first place. Later came ‘A Song for Marion’, the upside of ‘Amour’, but the oldies in that, as glorious and as heartfelt as they were, were still no match for Jennifer Lawrence’s star turn. The lead actor in ‘Rust and Bone’, Matthias Schoenaerts, took my breath away, with Mads Mikkelsen being almost as impressive in the Danish drama ‘The Hunt’. And then there was Daniel Day Lewis in ‘Lincoln!’

Despite all those incredible movies and acting performances (throwing in ‘Life of Pi’, which absorbed me just before SLP), the David O Russell directed opus still remained top of my list. It had moved just about every emotion in this hoary sixty plus year old body of mine. But, hell, along comes my latest viewing ‘A Place for Me’, and that has given me some serious thinking to do – and we’re not even half way through the year! Does that movie do the trick? Does it overtake SLP? Maybe, maybe not – but gee, it was good!

I suppose its sucker punch was its subject matter – dysfunction within a writerly family. The father, William Borgens (Greg Kinnear in surely one of his better roles) is an established scribbler, currently suffering writer’s block due to the break-up of his marriage to Erica (a Jennifer Connelly hardly being stretched). The shining lights of the movie, though, were the younger Borgens. Lily Collins (daughter of famed drummer Phil) is not quite Jennifer Lawrence – yet. She truly shone, however, along the same lines as the feisty Samantha. She has just followed in her screen dad’s footsteps and published her first novel. Initially trailing in her wake is Rusty, the nerdy sensitive son, oh so engagingly played by Nat Wolf. Logan Lerman, as Samantha’s love interest Lou, is an on screen charmer of the first order as well. It really is a sublime feat of casting to get a youthful brigade together that would all seemingly have the chops to go the distance in the industry. Only Liana Liberato, as Rusty’s troubled girlfriend, seemed somewhat underdone. As well as all this there was the icing of a Stephern King cameo (of sorts) towards the end.

The sound track can often make or break a film. With this film’s I must admit it did become a distraction for me, but in a good way. The disparate voices presented were all so appealing I found myself reaching into the recesses of my mind to try and identify the artists. Being unsuccessful I then waited for the credits to roll through to the list of tracks. I found that all, bar a few, were unknown to me. But I’ll be hunting out the soundtrack CD, now knowing I will need to search under the movie’s US appellation – ‘Stuck in Love’. Why change a perfectly apt name for Aussie release?????
This is the first directorial assignment for Josh Boone, and methinks we’ll be hearing (and watching) much more from him. He is next slated to produce a visual version of John Green’s stunning fourth YA novel ‘The Fault in Our Stars’. He wasn’t quite brave enough to steer this vehicle away from what I must admit was a somewhat cheesy Hollywood ending, but I nonetheless left the cinema with a smile on my face and a spring in my step. If only all life’s problems could come together so neatly in the end!
My years of retirement allow me unfettered time for movie going and so far in 2013 I have been blessed with some cinematic gold. Will APFM pip SLP for Blue Room supremacy – that still requires much rumination. For that, dear reader, you’ll be required to wait in undoubted anticipation for year’s end. By then, who knows what else may have emerged – but I have been chastened. I will not rush into rash predictions so prematurely again! 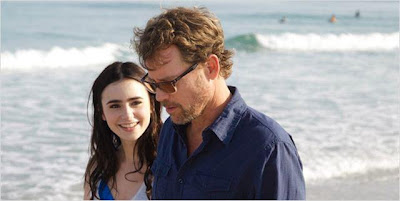 Stuck in Love/A Place For Me Website = http://stuckinlovemovie.com/
Posted by Unknown at 17:02