Harris, Me and the Deutz

Me was a boy taken from his dysfunctional parents shortly after the last war and then farmed out by the authorities to whichever relative would have him. He travelled light – the barest minimum of clothing, a few comics and his treasures, precious ‘artistic’ postcards of native maidens. The latter provided him with a certain currency and some tingly feelings ‘down there’. Eventually all his close kin rejected him and the powers to be had to search further afield. He eventually found a loving home with some distant – in both senses of the word – rellies out in the backblocks. These were the poor but generous Larson family on their decrepit, but fully working farm.

Harris, the youngest of the Larson brood, ‘ached’ for those, as he put it, ‘dirty pictures’ for he enjoyed feeling ‘tingly’ too. He, with his great mate Me, had fantastical adventures with attack roosters, a ferocious lynx cat and a pair of Clydesdales made gun-shy as Harris attempted to emulate his hero, Gene Autry. Then there were those commie-jap pigs to be dealt with. Barefooted, with their sole apparel dirty dungarees, the duo ran wild around the environs of the farm, engaging in scatterbrained projects including just exactly how to replicate a Tarzan adventure as viewed in a comic in a barnyard, as well as what would happen if a washing machine engine was attached to a rusty old bike? Then there were ‘science experiments’ such as what would be the result of a stream of piddle, emanating from Harris, coming into contact with an electric fence? A seriously frizzled wozzle, that’s what! Every other adventure had a similarly disastrous, but hilarious, outcome.

I do miss it – reading ‘Harris and Me’ to my enthralled charges over the last decade or so of my time at the chalkface. The book also provided a severe test of my own self control, for, no matter how many times I read the thing to my assembled students as they followed in their own copies, at some stage or other I would inevitably crack up and have to put the book down to wipe away my tears. Seeing their aged teacher dissolving into paroxysms of laughter only added to the allure of the book for my delighted cohorts. They were the good times of teaching, reading ‘Harris and Me’ to the young people of Yolla School. With many being farm kids themselves, they related to the vicissitudes of life on the land. 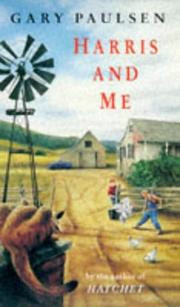 Gary Paulsen, the Canadian author/adventurer responsible for these fine vignettes of the sort of life that town-bred children will never experience, was quite prolific – but I haven’t read any more of his oeuvre. Why would I? ‘Harris and Me’ was perfect for my purposes, along with Colin Bowles’ ‘Surfing with Mr Petrovic’ and Tim Winton’s ‘Lockie Leonard Scumbuster’. All three titles are boys’ own adventures and I adored reading them aloud. Teaching heterogeneous mixed gender classes, I was always aware of the problem that the main protagonists in the titles were males, for sadly, whereas girls would ‘put up’ with this, if it were the reverse, boys never would. I made sure that in the short stories I selected to present there were feisty young women at their core.

I cannot wait for my precious granddaughter to age just a tad more and be closer to me when her parents move back to Hobart. She’ll probably get heartily sick of her old Poppy wanting to read picture books to her. For him it’ll be one of the joys of life!

So what is the link between Paulsen’s raucous tome and Deutz buses? Well it was Melinda Tankard Reist’s column in a recent Sunday Age that started me ruminating. Written under the banner of ‘Porno Invasion is Distorting the Lives of the Young’, it reminded me of my introduction to the ‘joys’ of the flesh – or at least the imaginings thereof. Back in the day I had little idea of exactly what it was that I was imagining – today’s young males are unfortunately overtly confronted with it, even if their viewings are a false reality. In her article Reist quotes disturbing facts about how early large percentages of children are subjected to the distortions of a ‘pornified’ world with resulting equally disturbing implications. It is salutary reading in the extreme; a universe far away from my first now oh so innocent investigations, indulged in at a similar age, way back when. As with Harris and Me, following on from them in the early sixties, my first foray was via similar dusky maidens in the pages of National Geographic and other non-fictions from the more ‘primitive’ parts of our planet – the interior of Africa, Pacific islands, Australia’s Western Desert and the glories of a more innocent Bali. Until that Deutz bus entered my life, these were my only experiences of unclad females in pictorial, or any other form, in all their wondrous variations, till Playboy came into my orbit towards the end of my teenage years. For many fellow baby-boomers the tale would have been similar, methinks.

My lovely, long departed father, bless him, was a bus driver for the bulk of his working days. In 1948 he was sent north from his life in Hobart to inaugurate the Burnie/Launceston route for the government owned Green Coach Lines. A decade or so on and along came the Deutz. This was the leviathan of modern day charabancs, and I remembered its arrival in Burnie and how proud I was that it was my father at the wheel for its introduction to my provincial town. I was at the depot eagerly awaiting my first sighting, but its entrance at first assaulted my ears with a low roar as it negotiated the Marine Board Corner and proceeded along North Terrace. When it turned into the passenger drop off area there I was, transfixed. My old man bought the heaving bus to a standstill, switched off the engine to the appreciation of a small audience of onlookers and stepped out of the shining snub-nosed behemoth. All were palpably impressed by this new addition to the fleet with its radical design features and obviously increased carrying capacity, made possible by retractable seating down its aisle. I reckon health and safety would consider that a no-no today. This was indeed a bus like no other. It was the sheer epitome of power and the latest of technology. It was as if a bullet train had replaced the lumbering Tasman Limited on the island’s rail tracks. For my father, though, it turned out it was something of a beast to drive 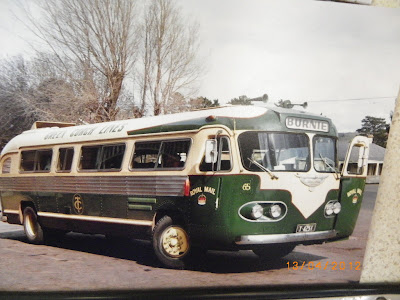 And soon I was riding the beast too! In my immediate pre-teen years it was a less stringent time and I was my father’s off-sider on many a trip to Launceston. I would help with the loading and delivery of freight, carried in a caboose up back with the massive, throbbing engine. I would also manipulate the arm that opened and closed the door to allow passengers to alight. The Bass Highway back then was a much different animal to the sleek four-laned autobahn it is today. It was narrow and winding being with, for the first part of its journey, religious in following the coastal indentations of the sea until Ulverstone. After that it took inland, up hill and down dale until Devonport/Latrobe; followed by ‘the Forest’ through to Deloraine. Then came the least demanding sector, through to the steep tortuous decline into the city on the Tamar. By the end of it all my father was spent from heaving that bus around so many corners and the mental attention required to drive such a large object in such slim confines. He’d been up at six and still had the return journey that would not see him take to his bed till around eleven that night. As a result, he and his fellow drivers had a room upstairs in the Launceston coach headquarters to enable them to catch a few hours’ kip. And that’s where they were – the magazines that were a far softer entry into the world of feminine curves than what my equivalents have to contend with today.

Firstly there were copies of ‘Pix’ and ‘Australian Post’ with their relatively demure bikinied pin-ups of modern womanhood. Getting racier, there was also ‘Man’ allowing, for the first time, this callow youth to view bare-breasted Caucasian women. Exciting stuff, but not the ultimate; not the holy grail – in the pile of mags were also ‘art’ periodicals of German nudists. I studied that language at school so I knew their origin. Amazingly for that era, inside the covers one could see ‘everything’. Well almost everything – there was something about them that monumentally puzzled me. I just couldn’t figure them out. Although some of the poses were full frontal, where I had a vague idea that there should be something of a feminine genital nature ‘down below’, in that general area there was just a certain haziness, so I was unable to discern exactly what that ‘something’ was! Of course I later found out about air-brushing – and what a job that must have been for someone on the other side of the world - that air-brushing gig. But that’s the point – there was mystery. I was introduced to it all so gradually – a much softer, gentler intro than these poor kids of the current day. They are confronted with much pinkness, much grunting and so much demeaning of the fairer gender.

So, whilst my father gently snored, a whole new world of possibility was opening up for me. I couldn’t wait to have access to it in real life. I felt the same stirrings as Harris when he first spied Me’s postcards. They were good feelings – feelings I never felt guilty about. How would I have reacted confronted by aggressive pounding sex force fed from cyberspace, with its abhorrent misogyny towards the women participating? When we, back then, reached the age to actually engage in the act, I suspect most men had no real notion of what to expect from their partners; of how their chosen ones should perform. What notions must male youths of today have of their conjugal initiations? What acts would they expect their girl friends to perform? It does not bear thinking about.

Yes, I cannot wait to read aloud again. My beautiful, precious grandchild is quickly approaching the age when that will be possible for me – when she will nestle down on her Poppy’s lap, book in hand, relishing the places the old man will take her to. I also live in hope that, by the time our collective grandchildren reach the age of Harris and Me, a way has been found to regulate away the easy acquisition of porn from the naivety of tender minds so that expectations are realistic and full of tingliness. Their journey into the sexual world should be one of mutual discovery, imagination and, above all, partaken at a pace sedate and reverential.