Now I knew practically nothing about Kanye West and that is the way it will remain after the few facts I discerned from googling. Wikipedia tells me he is a hip-hop artist, then goes on to inform that rap is a sub-genre. He is, by their account, very, very famous and sells by the bucket load. Then I realised I did know one thing - that he was the self-indulgent prat who leapt up on stage at the 2009 MTV Video Awards and dissed Taylor Swift for daring to win a gong ahead of his good mate Beyonce. No, I couldn’t imagine a more different musical world from those of his type (with their bling, musical misogyny, entourages, diva demands of promoters, strident emphasis as being deserving of ‘respect’ as well as, of course, super-inflated egos) and the two knockabout lads I saw on stage this last Friday eve. So it was to everyone’s surprise when ARIA announced a few weeks back that these two boys, from Grafton and Geelong, had the number one album in the country, ahead of Mr West’s latest. No, that couldn’t possibly be the case! Sure enough, the beancounters at ARIA did have it wrong, so the duo had to settle for second on the charts – no mean feat in itself. The two had paid their dues in spades so were thoroughly deserving and boy, can they put on a show!

Into the city they came. From the Coal Valley and the hardscrabble acres of the Southern Midlands the punters came. From the summer bushfire devastated communities of the Peninsula and the Upper Derwent Valley they came. Up from the valleys of my own provenance, down the Huon and Channel, they trooped. They were out for a good time; they were out to forget about life’s trials and tribulations for a while; the travails which are, ironically, largely the fodder for every classic country hymn. There was no conspicuous bling to be had with this lot; just blue jeans and simple attire for the sons and daughters of the farms and bush of this island. Their lined faces and furrowed necks told that, what they were about to listen to, they had been through. There were no airs and graces here, no Sandy Bay hipsters – these were the people of hard yakka; the people who loved their country music.

It was their album of country classics that was the surprise interloper of charts dominated by screeching, pelvis-thrusting, vacuous brats and one-hit wonder X-Factor winners – here today, gone tomorrow. These two have performed their way around this vast country of ours for years and are here to stay. Those of us gathered in a full room at Hobart’s casino were about to find out the reason for their ‘Great Country Songbook’s’ prominence on the best-seller list. These two don’t need digital technology to enhance their voices – they can belt out a tune, and when we weren’t stompin’, we were spellbound.

Of course they had something everlasting to work with, for these American and Aussie tunes they raised their voices to were songs the crowd had grown up with; had lived a life to – and they knew all the words too, every single one. In between the numbers our two leading men told yarns so grand of their own dalliances with country giants and stirred the shit out of each other with their humorous asides. Then they continued on, singing their hearts out to the tune of steel guitar and honky-tonk piano. No, there’d be a world of difference to a Kanye West stadium show, with flashing lights and gyrating bimbos, to this humble, simple affair of two laid-back fellows having a good time – and I know where I’d much rather be. 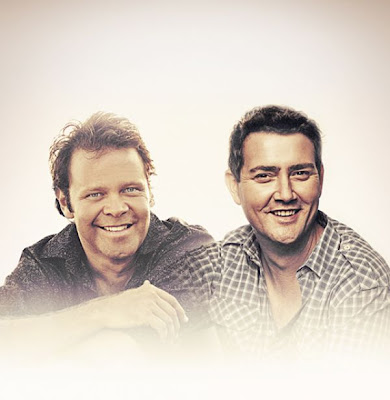 Troy Cassar-Daley and Adam Harvey that night evoked the memory of those treasured icons now departed – Freddy Fender (even singing in Spanish), the Silver Fox (Charlie Rich), the Man in Black, the incomparable Hank Williams and now we have recently lost the Possum (George Jones) too. Some are still with us – the Hag (Merle Haggard) is still rasping out ‘An Okie from Muskogee’ and Charlie Pride is about to tour out here again. Kristofferson’s voice is almost shot judging by his last album and Glen Campbell is doing the rounds one more time, before he succumbs to his terminal condition. As for Willie, well he just keeps on being Willie. Then Adam and Troy referenced Slim, with reverential renditions of a couple of timeless bush ballads. Despite their eminent or completed demises, the spirits of these legends lived on in that room last Friday eve, for the country diamonds they must have sung a million times, in their pomp and beyond, will never die - at least whilst troubadours like Cassar-Daley and Harvey are around, steeped in the lore of the genre.

There was a further spirit in the room, that of a father/grandfather who died too young but passed on the country music gene to his eldest and to his granddaughter. Yes, I was accompanied by my beautiful Katie to the affair – a daughter who for so long kept her own love of country a secret for most of her formative years for its perceived branding of uncoolness. She has now well and truly dispensed with that attitude. Her adoration of country music, as well as of a certain football team, is my pride and joy. She has been fully aware of Troy’s country chops for some time, but Adam was new to her. By performance end, though, she had another addition to her list of ‘crushes’ to rival Josh Ritter and Robbie (the Plonker) Williams. Adam won her over with his Waylonesque lower register coming in under Troy’s higher range, his sly wit and easy charm honed by a decade and more of gigs on the road. And he is pretty good looking to boot. It was only the second show of their tour supporting the album, and obviously Troy had not heard much of his friend’s comedic patter before, and I loved the way Troy’s face seemed to disappear, at frequent intervals, into his open mouthed guffaws in response. I had already met Adam in a far different guise back in my teaching days, with from that knowing the humanity he possesses as well. He is more than worthy of my Katie’s gushes.

When they chimed in together, creating perfect harmony on:-
There were seven Spanish angels at the altar of the sun
They were praying for the lovers in the valley of the guns
When the battle stopped and the smoke cleared
There was thunder from the throne
And seven Spanish angels took another angel home
I thought of my own precious mother who loves the Willie/Ray Charles’ standard and how I wished she could have been with me on my other side.

Will that gene Fred Lovell gave me be passed on down now to my own granddaughter? I know Katie and I will be doing our best to immerse her in such tunes as these to ensure that it happens. The Taylor Swifts and her ilk ensure it isn’t that uncool these days. Little Tessa had only arrived down from up north the day before, and I was able to view and hear first hand her newly minted aptitude for words and walks – and she entranced me just as much with her exploits as did Troy/Adam later. My Poppet is a darling little angel and if the first song she trills is a country one, I’ll have a smile as wide as heaven.

So, thank you Troy, Adam and Tessa for giving me a memorable few days. I sincerely hope that the hints given by the former two of a second volume of classics come to pass as well. In the last twelve months I have had the privilege of attending concerts by the sublime Emmylou and a spirited Kasey, but for my money these two country boys were the pick. 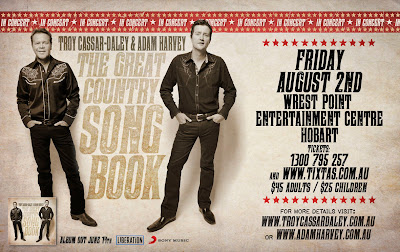 Troy and Adam sing a Slim classic = http://www.youtube.com/watch?v=hIb3sgzADYs
Posted by Unknown at 16:53