The thought that, in a few weeks, there is the obscene likelihood that the hapless, hopeless, wooden wonder that is Tony Abbott will be our new Prime Minister is an outcome that fills me with something close to despair. More Howardian than Howard, this Catholic bully boy of negativity is just what our country doesn’t need as we warily tread deeper into the twenty-first century. There is so much that is detestable about his policies – his ‘turn back the boats’ dogma designed to appeal to the rednecks of Sydney’s west; his promise of a mega baby bonus to those already doing quite nicely thank you; his watering down of the mechanisms to alter a climate change he is yet to be convinced is a major threat to the planet. And then, to cap it off, there is his obdurate stance on gay marriage – despite the fact that his own sister is proudly reflecting the colours of the rainbow. At least Kevin has had a change of heart; I suspect responding to his savvy daughter’s pressure as much as to the majority views of the public. Of course Abbott’s entitled to his personal stance, but the sheer bastardry of the man in forbidding a conscience vote for his followers on the Liberal side of the chamber is inexcusable in this day and age. He knows fully two-thirds of the general population is for it. If only my own state’s jelly-livered upper chamber had had the courage to pass the recent bill from the more forward thinking House of Assembly legalising same sex marriage, we’d now be reaping the rewards in the same way as the Kiwis are across the water. Once upon a time Australia was at the forefront of this type of thing – now we drag our heels big time.

Ever since Sean Penn bravely portrayed Harvey Milk in that eponymous movie, even the Americans are now placing gaydom on the screen. More and more of their states have allowed their homosexual constituents their rights under the equality banner. In recent weeks I have had the pleasure of viewing two vastly different films, with gay couples at the core, emanating from that part of the globe. Despite being at opposite ends of the homosexual spectrum, the two couples featured in this duo of cinema delights adored each other – one pair for years, the other for a lifetime.

Michael Douglas, in ‘Behind the Candelabra’, displays the reason uber-director Steven Soderbergh waited patiently for the actor to recover from his close encounter with mortality, in the form of an unusually contracted throat cancer, to make this feature. Masterfully casting against type with both his main leads (Matt Damon plays the love interest), the director conjures the performance that I suspect the son of Kirk will be remembered for, even outranking his Gordon Gekko. Filmed with a Luhrmannesque flourish, if not quite the colour palette, this supposedly is Soderbergh’s last big screen effort before retirement. He has left us with a beauty. Douglas is Liberace, warts and all -including occasionally being minus wig. The man’s sequined high-camp presence is there filling the screen. Sadly this film also marks the end of the road for Marvin Hamlisch, who passed on last August. His piano score reflected all the vivacity of the larger than life pianist. Around the two compelling performances at its centre, there were also some fine turns from the supporting cast enhancing proceedings. In a blast from the past, Debbie Reynolds is delightful as Lee’s mother. Back in those days, of course, the thought of two men joining in holy matrimony was unthinkable. Liberace first wanted Scott Thorson as a lover, then as a doppelganger, then as a son. Finally, though, Scott is turned out into the wilderness as a drug sodden reject. The final scene between the two men was revelatory of the era when the scourge of AIDS was at the disease’s predatory peak. 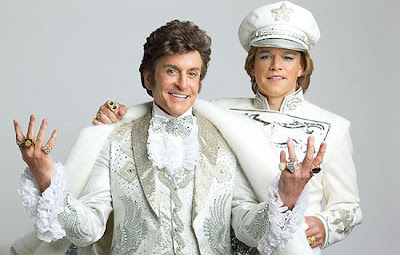 The bonus in this terrific movie is the performance of Rob Lowe. He almost steals the show as the ultimate parody of a cosmetic surgeon – it’s a world away from his Sam Seaborn of ‘West Wing’ fame doings.

‘Cloudburst’ is a beast of a different nature, as well as of gender. Here the two protagonists were of a similar age – around Liberace’s. One’s apparel is bib ‘n’ brace and flannel shirt; the other’s, almost blind, is a matronly dowd. The former, stirringly played by a feisty Olympia Dukakis, has some tough choices when her partner for life (Brenda Fricker) is railroaded into a nursing home by a zealous daughter, being the only person completely unaware of the true nature of her mother’s relationship. Stella decides to break Dot out of her confinement and do a bolt to Canada, where gay marriage is legal. Of course nothing goes to plan, but with the aide of a very weird hitchhiker – Ryan Douchette – the old dames have some very interesting adventures en route. This film is certainly more conventionally tender-hearted than the biopic. As befits an indie, there’s none of the former’s outward glitz here. This is real life, complete with some blissful New England/Maritimes scenery.

The bonus here is the most in your face hilarious, full frontal male nudity encountered on the screen in quite some time. The point of it being there is uncertain, but it sure livens up the road trip. 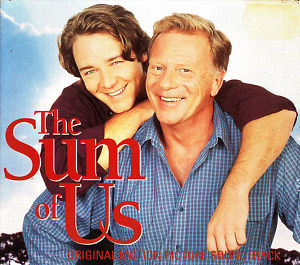 These two movies were equally enjoyable for various reasons, but to my mind the best on the subject remains our own ‘The Sum of Us’, with a very young Russell Crowe as a gay son. The iconic Jack Thompson deftly plays his loving father. It is now somewhat dated, but still a joy to watch as I discovered when I inserted it into my DVD player a few weeks back. Given that this was made in 1994, it seems that Australia, once a world leader in social reform, is still only marginally closer, than back then, to granting equality to a significant sector of our society. With Abbott at the helm I fear we will remain as far away as ever. With this and our return to the fears once represented by the abhorrent White Australia Policy – what have we become?