CHAPTER ONE
In which your Blue Room scribe encounters and withstands the attack of an Asian martial arts devotee.
It was our first stop, less than an hour out of Hobart. I was wandering around in a reverie, as is my wont in any retail outlet within which I have no intention of spending money. DLP (Darling Loving Partner) called me over to examine some alpaca jackets she felt would be just the bees' knees for the adored Poppet, being so reasonably priced, and I agreed. I thought, if the budget would allow, I would call back in on the return journey. DLP then went one way, and I wandered off in another direction entirely, vaguely looking at the touristy not-so-tat on display. I was somewhat aware of another couple over by the serving counter, locked in discussion with the two shop assistants. Between myself, and the display I was meandering towards, were a couple of attractive mats/rugs on the floor. 'Nice,' I thought as I prepared to walk across them en route. And it was then it happened, causing me to stand stock still, with one foot poised above the first of the mats. It was the male of the Asian couple that caused me to freeze. From the counter had come the guttural cry of the banshee, and from the corner of my eye I caught the vision of the utterer of the screech exploding away from the sales area, charging towards me, fists clenched, in a semi-crouched, crab-like gait. I took a step backwards and prepared to defend myself – as much as a sixty plus unfit pacifist can, knowing he'd be no match for this younger assailant. I was, at this stage in events, completely at a loss as to why I was the recipient of such aggressive attention. In a flash he was to me, but then he pulled up. He then rose to his full, not overly considerable, height. He unclenched one fist and transformed it into the internationally recognised stop gesture. With the other hand he pointed down to the rug – and then I finally twigged, after first gleaning I wasn't in for a martial arts flogging. He and his wife/PA/lover/daughter had had the mats spread out on the floor to observe them, from a distance, preparatory to making their purchase. He, unlike his female companion, obviously spoke no English, as I immediately discerned when retreating to a safe distance to discreetly observe further proceedings. His stunningly attractive, expensively attired compatriot was evidently the broker in the exchange. It seems they were haggling with the counter staff. He obviously held the purse strings. She was running between the two parties – all sweetness and giggly laughter. He was dour, unsmiling; this stocky, presumably Japanese sugar daddy (just supposition). The retailers were being polite, but firm. The issue was over five dollars. The asking price, as low as they could go with, whilst still retaining a profitable margin, was $245. His best offer was $240. Back and forth it went until he raised his hands and reluctantly agreed to the higher amount for the rugs. Much congratulations ensued from both parties, but then DLP re-emerged, clutching a bottle of Taverners honey flavoured ale for me. I enjoyed the beer immensely later the same day – far more than I enjoyed the fleeting prospect of being karate chopped or jujitsued to an inch of myself, at the commencement of our Christmas present to ourselves. We were going south – deep south, and we were soon on our way.

Tourists to the capital of our little island in the southern seas frequently point to the mountain (Mt Wellington) and ask, 'What’s on the other side?' The answer they'll frequently receive is, 'Antarctica'. Of course, this is not at all correct – and it's given to keep pesky 'blow-ins' away from one of Tasmania's true treasures – the Huon. And that's were my DLP and I were heading that day I survived the attack of the masterly oriental judo black belt fanatic. 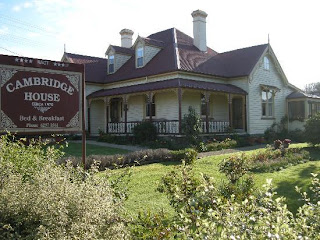 CHAPTER TWO
A chapter of family connections and freakish platypi.
Yes, I know, it's platypuses, but platypi sounds so much better. After the almost violent event at the Huonville Tourist Information Centre, we reposed for an enjoyable, sun-saturated lunch at Franklin's Petty Sessions Cafe, before proceeding on our way to our southern excursion's base, a B and B, Cambridge House at Geeveston. Now I knew that, on my mother's side, I was related to the Geeves after whom this Huon town receives its appellation. They were its founders, commencing its tradition as a centre for forestry. Was it more than serendipitous is that our hostelry turned out to be the former family home of the Geeves of Geeveston? We were shown to our attic room by our delightful host, Karen, who informed us we would be retiring in 'Mary's Room'. An old photograph of Mary Geeves featured in our more than adequate accommodation for our two nights down south. It gave a few scant details about her underneath her portrait, stating she was the fourth child of John Geeves, the town's founder. Added to the 'meant to be-ness' of the occasion, I was also informed she entered life in 1851, exactly a century prior to me. My antenna was raised – there is a story in all this. Stay tuned!

At Cambridge House there were more commodious rooms on the ground floor below us, but we had use of a tastefully and eclectically furnished lounge, as well as a front veranda overlooking a glorious garden with a creek frontage – a creek famous for its platypi. Karen, and partner Glen, are treechangers; much like the nearby Cygnet based Matthew Evans, whose SBS series, 'Gourmet Farmer', has brought this idyllic region to national prominence. Treechangers figure prominently in the Valley and beyond. They have escaped the pitiless nature of big city mainland existence for the bucolic splendour of my paradisiacal island. Our hosts were from Brisbane, and Glen has achieved local fame as a master conjurer of marmalade of great repute. His brew is a stand out of their equally stand out breakfasts.

Geeveston itself was quiet so late in the holiday season. It is a timber town trying to reinvent itself as a tourist hot spot, to varying degrees of success. It is on the way to Tahune, which helps, as do the very compliant platypi. Karen promised these monotremes would put on a show, and they did not fail her. Later that evening, we were returning from our repast, following the creek back to Cambridge House, when DLP noticed a certain rippling up ahead on the surface of the water. I went to the spot, left the track, and proceeded up the bank overlooking the place she indicated. And there, immediately below me was a platypus, at rest, He/she looked up at me, I down to him/her, and we had eye linkage. I was entranced, but in a flash it was off to continue its nightly frolics. Little was I to know that, only a week later, I was in for a repeat, in much different circumstances (see 'Melbourne, Death and White Nights’).

Previous to that, in the early evening, we had headed off in search of some evening sustenance. Despite signage to the contrary, we found 'central' Geeveston had shut up shop as far as dining was concerned. The only place open was on the outskirts, but it nonetheless did us a most agreeable kebab based meal. At this eatery we were soon chatting away with John and Barbara – grey nomads from Harbour City. He was making his eighteenth trip to the island down under Downunder, she was a first-timer (and she loved it). He was attired in grey nomad garb – trackie dag. She was dressed for a night on the town, such as it was. Barbara was extremely well presented. The beautiful old dame was doing her partner proud in her sophisticated Sydney finery, and she looked most fetching – and, as well, she had a story to tell. I adore a great yarn and she sure produced one. Their next port of call was a visit to Collinsvale, at little hamlet on the western flank of Mt Wellington. She was out to get her father's provenance. It seems he was found wandering the desert by members of the Light Horse in Egypt – so I presume we're talking the Great War. Somehow they arranged to take him back to Oz after the cessation of hostilities, and he spent his formative years overlooking Hobart on the side of a mountain. She wanted to know more, and evidently there were people still around in Collinsvale who could fill in the missing bits. I'd love to know the outcome of all that!

In Part Two your Blue Room scribe meets a mother on the warpath, unclad personages, ventures as far south as it is possible to behind the wheel of a car, and samples ewe's milk ice cream.
Cambridge House website = http://www.cambridgehouse.com.au/
Posted by Unknown at 14:18