You learn very quickly on the sub-continent. I'd only been there half an hour tops, but I had already discovered one vital fact about India – nothing is straight forward!

I have never been to India, despite what is written above. Dear reader, you will discover the reason for this apparent contradiction if you peruse onwards. Once upon a time, before my wish list became my bucket list, visiting India was priority numero uno. Now that the transition from the former to the latter has been made, I have downsized. India is still there, but under a column headed 'Close to Buckley's'. I won't cross it off just yet, not while there's life, health and hope. 'Safer' goals now, rightly or not, take priority.

Of course India is back in the news of late – does this huge, crowded, dynamic, vibrant, emerging global powerhouse ever leave it for long. The current headlines are insignificant compared to the last time – the despicable treatment by male thugs of a vulnerable woman on a bus. At least her violent violation galvanised the nation and caused a government to act – something we could learn from here, as well, given the equally horrendous fatal uber-misogyny that occurred on Sydney Road, Brunswick. No, the cricket issue is a 'storm in a teacup' in comparison, but it's there and therefore up for comment. When all thought the antics of blokes like Boon, Walters and Symonds were a thing of Australian cricket's neo-neanderthal past, up pops four fellows who are yet to realise being paid squillions more than the aforementioned means a certain responsibility to team and country. Mature professional sports people are comfortable that their significant remuneration means much is now expected of then in the modern, if beige, era – that there is no place for 'me first' and individualism. You have to give now to take. Four were unwilling to follow the guidelines, and were rightly penalised. One prima donna, in a fit of juvenile pique, has taken his bat and gone home – and he's the vice-captain to boot. Deplorable, but at least there's hope for the others who are suitably contrite.

Admittedly the current team touring the subcontinent is decidedly lacking in the grizzled, battle- hardened veterans so needed to give fibre and provide the example by their deeds. Clarke does this, but from all reports Watson has spent much more time on tour sulking than he has in the middle; or making a positive contribution to off-field 'culture'. The news out of India would make the soon to be pursuers of the Ashes akin to another 'Australian' team that toured there in the early noughties – the equally ramshackle Abbotsfield Anglers. They played with varying success in the lower divisions of the Melbourne park cricket roster, but nonetheless sort of represented Downunder in the cricket mad home of Tendulkar and mesmerising spin. This event was first celebrated in a humorous documentary made for television, and then recently retold, and elaborated on, for the big screen. Given the events of our hapless elite cricketers, 'Save Your Legs' is remarkably prescient, and not a bad film to go with it. It had a big build up in pre-publicity before it exploded into cinemas all around the wide brown land, but sadly the viewing public have stayed away in droves. It is now disappearing out of the multiplexes after a truncated run, but I was fortunate enough to catch it before our local had issued the final rites. Maybe the small screen will be less harsh in judgement; or perhaps India will be beguiled. I'm at a loss as to why Australians will embrace something like 'The Sapphires' and not this, which has a very similar 'feel', and is largely set off shore too. There's plenty of irreverent humour, some seemingly regulatory gross-out revolving around Delhi belly, and a sweet romance. Curry, Cowell and Gameau make a good fist of their leading roles. Pallavi Sharda shines as the love interest, and there's even a 'Slumdog Millionaire-ish' Bollywood finale of sorts. Sure there is a bit of clunkiness here and there, but Mother India is entertainingly presented in its teeming glory. It is pleasant lightweight fluff, with grown thirty-something men behaving like post-teen tossers – or like Shane Watson! It is not the stinker its box office suggests, even if I felt it needed a tranquil 'angling' in the Yarra scene to give the name of the team a reference, perhaps as a preface. 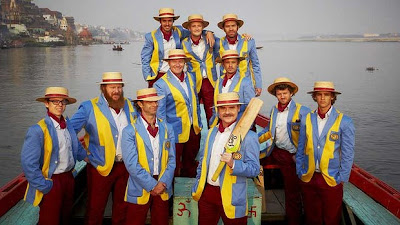 Teddy (Michael Clarke, sorry — Stephen Curry) is the effective leader of the team, trying to hold it all together. The on paper captain, Rick Shaw (Douggie Walters, sorry — Brendon Cowell), although naturally gifted, is more interested in the local weed than his responsibilities. At first drop we have Stavros Bane-McEvoy (Shane Watson, sorry – Damon Gameau) who is selfish and self-centred, even if he is capable of swinging a match. This struggling knockabout movie deserves better than the Australian public. It's not 'Lincoln', but it spins a reasonable yarn of acceptably wrought whimsy and pathos. And the struggling Australian cricket team deserves someone more worthy than the fragile, underachieving and self absorbed Shane Watson as its vice-captain. Let’s hope the ACB has more backbone than to do a Kevin Pieterson number with him!

And that lesson I discovered in a country I've never visited – for the patient, here's the story. It was 1976 and I was returning from a brief six week European sojourn. British Airways was the carrier, and mid-flight we were almost due for a refuelling stop at Mumbai – it may have still been Bombay back then. I had a decision to make – to use the over worked, on the nose micro-loos on board, or await our stopover. It was a no-brainer. I chose the latter. Coming into land was an eye-opener. I do not know if it is still like it, but hard up against the runway was a shanty town, its population engaged in their early morning ablutions impervious to jumbos taking off/landing a hair's breadth away. Once inside the transit lounge, I made a bee-line for the loos. At this just post dawn hour they were spotless, commodious and blissfully empty. On finishing my business in a cloyingly sweet smelling cubicle, I moved to the wash basin area to find that half a dozen men, obviously from the nearby shanties judging from their decrepit attire, had suddenly appeared out of the ether. All were proffering me a thick, white steaming towel. 'How lovely,' I thought. 'They obviously know how to treat the weary traveller here in India. What service!' I selected from one of the profferers, but what was the correct etiquette? Do I merely wipe my hands with it, or do I go the whole hog and refresh the face and armpits as well. They were all watching with rapt attention. Hoping I wasn't being crass and offending local sensibilities, I went for the latter option, and then proceeded to hand a now well-used towel back. He graciously took it with one hand, but then the other was raised, palm up. Now, naively, it had never occurred to me that I had to pay for this privilege, but no worries, I thought, I'll just empty my pockets of change – and that, dear reader, was almost my downfall.

You see, my point of departure from Europe was Rome, and therefore my pockets were rattling with, no - not the solid(ish) euro, but next to worthless lira, a mixture of coinage and small notes. The towel provider looked at what was in my hand with consternation, and said one word, 'Dollar'. With that he and his colleagues took one step towards me. I nervously mumbled, 'No have dollar.' Another step forward was taken. 'Show wallet,' was demanded. Now, in those pre-credit card days, as I wanted to avoid the hold up of having to change money at Tullamarine, my purse was empty. I now uneasily displayed it to those blocking any effective escape route. I was beginning to think my last minutes on the planet would be spent in an Indian toilet, or at best the plane would leave me stranded if, at some stage, I managed to talk my way out of this now fraught, to my mind, situation. Whilst I was thinking these thoughts, my assassins-to-be were also engaged in a feverish discussion amongst themselves. Then one pointed to my hand, still clutching Italian funny money, stepped forward even closer, stared at me for what seemed an eternity, and uttered, 'You give.' I did as required, and then, thankfully, he stepped to one side, opening a pathway to freedom, and ordered, 'You go.' I didn't need to be told twice.

And no, I didn't miss my flight. Now for many India can be a challenging place, especially for newbies. It can be unforgiving, but these days, for our cricketers, cosseted and not wanting for any human comfort, it is not the tough ask of the days of yore, at least until they enter the playing field. Consider Ed Cowan, who scratched and sweated for ball after ball for nearly three hours, exercised patience and gave utmost value to his wicket in the second innings of the Hyderabad debacle. Watson faffed around for a bit and gave it away as being too hard. Cowan has half the talent of our vice captain, but is twice the cricketer.