Beware - Alpha Female on the No 96 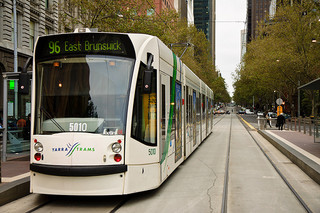 Melbourne trams are a joy. I adore scuttling around the inner city on them – and their clientele are a constant source of pleasure, kindness and indicator to the vibrant multiculturalism that is this city on a brown river. So I was taken aback when, on a recent journey, the following occurred.

I was due to fly out of Tullamarine later in the afternoon and still had plenty of time, but after an obligatory visit to JBs in the CBD, I had had enough. I was stuffed after three days of 30º heat, and being on the go, so I decided to catch the No 96 from the Mall back up to my hotel opposite Southern Cross Station, collect my baggage and proceed on out to the airport. It's only a few blocks, a journey I could do blindfolded. My reverie induced by the clatter of wheel on rail, though, was soon shattered by a loud, stentorian female voice. It dawned on me that the producer of the accusatory interruption was mightily miffed by something, so I searched out its source on the reasonably full conveyance. She was sitting further on up the tram; a very elegantly attired, not unattractive blonde, of around fifty or so. I didn't capture the wording of her opening volley, but the remainder of what became a tirade went something like this:-

'Yes, it's you I am talking to, you disgusting man. You there, standing there in your suit, you perverted creature.'

We all looked around; or at least those of us of the male persuasion, to figure out which of us she was referring to. I realised I was safe – I was attired in t-shirt and shorts. Next to me was a balding, sweating, somewhat overweight fellow, approaching fifty as well I would have thought – and he was suited. We'll call him Mr X. It dawned on him that, yes, he was the one in the gun. He pointed to his chest.
'Are you referring to me, madam?'
'Yes, I certainly am, you odious man. Of course it's you, acting all innocent in your suit!'
'What do you think I have done, madam?'

At this stage his voice was calm, whilst hers remained sharply accusing.
'What do you think? You were at the lipstick counter in Myers, weren't you?'
'It's none of your business where I was, madam.'
'You were at the lipstick counter in Myers, following me around. You left straight after me, following me out, and now you’re on this tram. I know, I saw you do all this. You are stalking me, aren't you? Admit it!'
'Madam, I certainly am not. I have never seen you before till this moment!'
'Well then, what were you doing in Myers – you, in your suit? You should be at work! Why aren't you at work?'
'Madam, I repeat – it's none of you business.'
'It is my business if you're stalking me. You are stalking me aren't you? Aren't you? I demand an answer.'
'No madam, I am not. If you must know, I was in Myers buying my wife a present. Here!

With that the now not so cool Mr X held up a small black Myers bag.
'I don't believe you. You are stalking me. Tell me why you aren't at work. I bet you don't even go to work, do you?'

With this Mr X, the accused, turned his back to the woman. He apparently thought that by remaining stum she would shut up. But she was not finished with him yet! Not by a long shot!
'I repeat,' she yelled, 'You should be at work, not stalking women on trams. Why were you in Myers? Why are you wearing a suit when you obviously do not go to work? You are stalking me, you nasty man. I will not stand for this any longer! Unless you answer me, I am going to call the police. Answer me. WILL.....YOU.....ANSWER.....ME?

By now Mr X realised by ignoring her she wasn't going to go away – if anything she was getting more vehement. He turned and faced her, clearly now shaken.
'Madam, listen to what I am saying. I am on my break. I caught this tram down into the city to buy a present for my wife. You can look at it if it will shut you up. I am now on the tram going back to work. I've never laid eyes of you before. I am not stalking you!'
'No you're lying – you stalked me in Myers; you stalked me out of Myers; and now you're here on the tram, still stalking me!'
'Madam, whatever medication you are on, I suggest you take it, go home and have a good lie down. Good god, woman – why on earth would I be stalking you?'
'How would I know? Maybe this is what you do every day?'
'You're mad!”
'How dare you! I want you off this tram. Off it now! If you do not get off I am calling the police. There's a stop coming up. I demand you get off this tram! GET.....OFF.....IT.....NOW!'

And he did. He was beaten and he knew it. He pushed through those also waiting to depart. It was my stop too. As I stepped down I saw him scurrying off down Spencer Street, head bowed, getting away from the whole business away as quickly as possible. I then peered back into the train at the seated lady. Did I discern the hint of a smirk on her face?

Now, I had no way of knowing, but my gut tells me that the victim in all this did not spend every waking hour stalking the matrons of Melbourne. I felt for him – but maybe that is because of my maleness – maybe someone of the female gender viewing this whole sorry affair would be in her court. It did take me back to an event the previous weekend when I was on the receiving end of some unsavoury accusations, as well, from a very fired up, overt woman of a certain age (see 'Going South – Part Two). I bet any pleasure Mr X was expecting to have through presenting the real woman in his life with a gift had completely dissipated as a result of the alpha female on the No 96.
Posted by Unknown at 20:57