In which your Blue Room scribe meets a matriarch on the warpath and delightful unclad personages.

She came charging down the beach, this mother hen, her hackles and voice raised. She was in no mood to take prisoners, and unbelievably I was the source of her outraged ire. Do I learn a vital lesson the hard way!!!!!!!!!!!!!!

At breakfast that morning our gracious hosts, at Cambridge House, gave us some useful advice for our travels for this the second day of our adventure in the far south. They suggested we take the scenic coastal route between Geeveston and Dover on the way going down to the Cockle Creek Whale, rather than on the return journey, as I had planned. And we did – it was sage instruction as the photo opportunities were so frequent, on this gorgeous summer's day of blue sparkling sea, that our progress was extremely slow. DLP cautioned, at one stage, that if I didn't get a move on our ultimate goal would have to be abandoned. I can't think of a more spectacular drive on an island very generous in providing glorious littoral vistas. The highlight, which turned out to be of a wholly different nature than what I expected, was when we manoeuvred around a sharp bend to be confronted below with the spectacularly pristine ribbon of pure white sand that is Roaring Beach. On its narrow approaches there was no where to stop for a snap above it, so I thought I would have to content myself with captured images from sea level. We turned into the shack fringed esplanade, looking to stop at a pathway through the scrub to the sand. I spotted one opposite, then had the intention of driving up the rise at the end of the road to a turning circle, and coming back down to park adjacent to the entrance of said walkway. At the top of the incline, though, I spotted two brilliantly hued sculptured eagles rising from a rocky outcrop off to the beachside of the car. What a shot that would make – the bronze raptors against the sublime sky! As I walked to edge of the platform of land above the beach, my mind was totally focused on photographic excellence. It should not have been!

I snapped the eagles, and looked around, to see if there was any other feature to deal with similarly, when I spotted a matronly woman walking from the sea, gesticulating towards me. I was a tad surprised, took it to be a wave, and responded. She continued gesticulating, and it began to dawn that something was amiss with this scenario – but what? I looked around the beach, and then down – and became rudely aware just what the issue was with the woman. Immediately below were two figures, unclad, one very pregnant. Now I am not silly – I knew cameras and unclothed bodies on beaches are an uncomfortable mix, so thinking caution was the best policy, I quickly withdrew my presence and returned to the car. I explained to DLP the reason for the leaving, and returned to my original plan of accessing Roaring Beach by the prior spotted track – mistake number two. 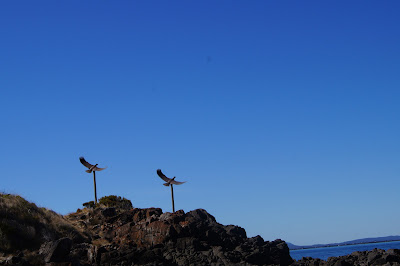 I was no sooner on the strand, at a more than respectable distance from the trio further up, than I espied the matronly one haring towards me. I thought I would diffuse the situation with a calm explanation, but as she bustled closer, I could see she had her dander up. She was severely agitated and started informing me of the low life pedigree I obviously possessed to be sneaking around a 'known' area for nudism in the local area – and what's more, in possession of a camera - presumably to be used later for self-gratification, or worse, posting on the internet. I tried to remain cool and, when I could get a word in, I gave my side of the business – that my object was the avian installation, that how was I to know that the spot was reserved for those who preferred a freer existence on a beach (I later checked for signs - there were none), and that I was deeply resentful of her accusations. She was not mollified – she obviously had me down as a skulking pervert, a contemptible peeping-tom.

It became apparent that it would need further action on my part if this woman was to be placated. By this time she had informed me that the two others involved were here son and daughter-in-law, and I had ruined their joyous pleasure of communing with nature in such an innocent manner. Oh dear! So I figured the only option I had was to display for her the sole image I had taken. To be safe I also showed a few prior snaps, so there could be no doubt to my story. Even this was not enough – she demanded to see every image to ensure there were no other poor unsuspecting souls I had preyed upon. Enough was enough; I refused, stating I had rights as well. I was beginning to feel that she was in no mood for any proof of innocence – she thought she had me nailed and was determined to get her pound of flesh

By this time the couple whose modesty she was railing about had arrived, clothed, so I gave my explanation, plus apologies, to them – and they were immediately happy. This seemed to calm my accuser down. She began to see, I think, my side of things, just a tad, and soon left, after we had shaken hands. The young couple remained with me, the son apologising to me for his mother's over-reaction – 'Don't worry about Mum, she just goes over the top sometimes.' We chatted for quite a while before I moved off to do justice to some more of that striking beach. When I returned to the car, sometime later, I found DLP in happy conversation with the pair. Mother passed us by, still seemingly affronted, and as well, miffed, judging by her manner, that her cubs were getting on so famously with such a degenerate and his good lady.

I learnt a lesson – a lesson that my beloved DLP has had the prescience to remind me many times is a failing of mine – that I need to be more aware of what is going on around me. I need to be more observant. Had I been the whole incident would have been circumvented. Beaches and cameras these days have a very tenuous relationship. Rennie Ellis would be turning in his grave.

But there are issues here as well, I think. Had I been a female with camera would her reaction have been so virulent? Given that there were no signs warning that this area was 'clothing optional', and therefore for all intents and purposes it was a public beach, what if I was offended at the sight of nudity. I am not, and the brief glimpse I had was one of imminent motherhood presented in all its beauty. But still the situation should not have arisen whereby either party could be affronted. I wonder if the Huon Council is aware of the known nudist beach within their jurisdiction.

CHAPTER FOUR
In which a drive to the end of Australia is achieved, another couple with a story to tell are encountered, and your scribbler imbibes of the delights of ewes' milk ice cream.

I know there is virtually no chance that I will ever reach the northern most extremity of Oz that it is possible to access by car, or possibly the western one as well. I have had the pleasure of mounting Cape Byron in an automobile, and now we were about to venture as far south as it is possible to go by road in the country.

The above incident did shake me, but after continuing on past Dover, Southport and the most southerly cafe in Australia, at Ida Bay, my spirits started to lift. Past the latter the bitumen vanished, and the road ahead was one of heavily corrugated gravel. I was surprised at the amount of traffic, all driving to conditions apart from one idiot P plater who was gunning it, ignorant to his scaring the bejesus out of his fellow road users. I knew there were no permanent residents south of Ida Bay. I thought we'd probably encounter a man, his dog and not much more. But no, way, way south was teeming with people, both at Catamaran and the Creek – campers and shackies. And no wonder, on this glorious day, what a glorious place these two pinpoints on the map are! At the end of our journey we left our car and walked to the Whale, a memorial to those who hunted this creature almost to extinction in days of yore.

I had always wanted to visit Recherche Bay, not so much for its beauty, but for its history. As well as a whaling station, it was the scene of one of the first meetings between the island's indigenous people and Europeans. The French, doing the encountering, also planted the first non-native vegie patch on Australian soil here, the remains of which are still discernible just across the water from the bronze cetacean
The leader of the expedition, Bruni d'Entrecasteaux, reckoned the Bay was marvellous – 'Why,' he mused, 'it could give safe harbour to all the navies of the world.' He was less impressed by the flies. 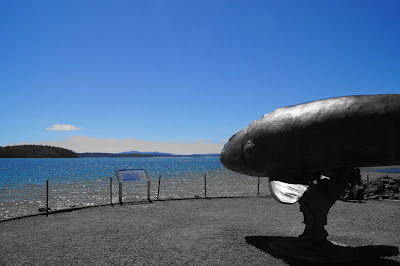 We also encountered another interesting couple down there, two sisters of a certain age who, like Barbara in Part One, were searching out their roots. Every gravestone at Catamaran cemetery, according to them, was a marker to an ancestor's last resting place. There would also be a few good yarns there too.

It had been a full, if salutary, Saturday. Our drive from Cockle Creek back up to our base was uneventful, and that night we had a none too shabby meal at the newly refurbished Kermandie Hotel. Sunday dawned, and we wended our way back to the capital, via Cygnet and Birch's Bay. The former is now a diverse mini- Byron, home to numerous mainland refugees, and devotees of alternate/organic living. The latter hamlet is the home of Grandvewe Cheeses. I sampled their ewes' milk ice cream, perfect on a super hot day, as well as the sumptuous view of the Channel, and Bruny beyond, from their deck – magic!

So in the end we had encounters with fellow travellers, Oriental rug buyers and a personage who definitely had the wrong end of the stick. Our 'Going South' was a terrific affair, with much dinner party fodder for months to come. We had a ball, to be long remembered by my beautiful DLP, and a scribbler who needs to be just a little more au fait with what is going on around him.
Posted by Unknown at 13:22