The Old Man at the Pub

He’d had enough. He’d heard it all before – from the skiters, the gunnas, the wannabes and the neverwillbes. In fairness they were all good people – mostly they’d had a few too many, even at this time of day – but what else was there to do? He’d heard the stories over and over again this week from hell. They retold and retold of the narrow escapes as the fireballs descended on the town, the little town that was half no more. Tales of how a house was saved, of how a business was lost, of how the sea was the only place to go. He had to get away from the bar. Away from all the bullshit of what they would do when the insurance money came through, away from the woe of those who wouldn’t be getting anything. There were just too many stories – repeated over and over and over. As if the telling of the thing would make it all go away.


He found it no better out on the veranda – just as crowded. He went down and across the crowded lawn – a lawn full of tents from charities providing tucker and other essentials – full of, not do-gooders, but kind people doing good. He’d had enough of being done good to for a while. He saw that down by the fence it looked quieter, so the old man headed there. He placed his hoary, hard-bitten hands on the top rail and looked at the road out of town, the sole road to the blackened peninsula beyond. Another police convoy was passing, this one going back to ‘town’, back to Hobart. In it were tourists finally getting out, fancy hire cars being driven away from their strandings, trucks full of livestock being taken from the black to the green. After a while he’d seen enough of that too, so he lowered his head and closed his eyes.


He’d grown up in the little town. He’d gone to the little school that was no more. That broke his heart, that did, seeing it flattened. His own three had gone there too. He liked the town, didn’t want to move. All he knew and wanted was here. He’d gone away once. A long time ago he was forced to go to an Asian war, but came back here knowing he’d never fight another one. He worked with his own dad on a fishing boat, and when he passed away he’d crewed on another. But the industry was dying, and after he married he’d wanted more stability, so he went to work in the new sawmill – also no more. The wood felt better in his hands than fish ever did. He’d stayed there until he was simply too old to do his fair share. He didn’t have to be told when that was.


Beryl was a fine woman, a comfortable woman, and she gave him two beaut boys and a lassie. They’re all up in the city now, doing well. When Beryl was taken too young, he gave up the old weather-board house in the little town, and moved around the corner to a shack at Boomer Bay . He was content enough there – he had the sea out front and the bush at his back. He’d his old dog, a couple of cats, chooks and his lucky rod. He had a simple existence. A bit of fishing, the tele, the daily paper and a Cascade or two to wash it all down with. Every Friday eve he’d wander around to the pub, watch the footy with his mates and have a yarn. The lads and his girl took turns in coming down most weekends, little imps in tow. He liked that. They bought down supplies – spoilt him truth be known. He’d open an ale or two and they’d chew the fat. Yeah, it wasn’t too bad, the life he’d had.


Then last Friday the fires came. The shack was gone, but he’d hightailed it to the pub before it all got too bad, his dog with him. Gawd knows where the cats and chooks were now. He’d gone back once to look, but knew he couldn’t go back again. A mate was putting him up. He knew his kids were worried, but they couldn’t get to him till the road reopened. He knew he’d be welcome to live out his days with any of them up in town, but he wasn’t a city person. He knew he’d do his level best to work it so he could stay in his little town – even after all this. He had shed a good few tears, quietly, over the last week. He was shedding a couple now. He knew sooner or later a mate would spot him, give him a little time, then come over, place a hand on his shoulder and draw him back into the fold of his little town.


The call came through when the worst of the fires were diminished, if still threatening, down on the Peninsula. Was I up for going down there in one of the police convoys and bringing out one of the company’s hire cars for her? I said I was. The following morning saw me at the recreation ground of the town nearest to the fires, a town rallying so hard in support of those hard hit further on down the road. Places such as Copping, Connelly’s Marsh, Murdunna and especially Dunalley were doing it hard. Huge transport trucks were lined up at the oval, full of livestock feed. There were utes, their trays full of anything that would help – bales of hay, fencing posts, wire, roofing iron. There were semis loaded with generators to provide temporary power. Another had the portable Centrelink office, reserved for disasters, ferried across from the mainland. And there were mini-buses like ours, full of an eclectic mix of odds and sods going down to bring the cars back. By now most of the tourists belonging to them had been ferried back to Hobs by a flotilla of tourist ferries, pressed into evacuation mode.


Eventually the police car led us out, past the roadblocks and on to the black. And the black soon came, and stayed, for k after k. The bus quietened; a few took photographs. I thought of taking my camera, but did I really want images of all that destruction, of all those dreams sent to fiery oblivion? There were still charred sheep in the paddocks. I didn’t dare ponder too long on the precious native fauna.


A few started to tell stories in the hush. The woman next to me had sold her house in the bush, just outside the little town we now approached. Just six weeks ago a NSW couple, wanting a tree-change, had purchased it on-line. They hadn’t even seen it, and now never would. The woman told us all her possessions had been stored at her mother-in-law’s place, also on the large bush block. She and her family had lost all they owned. She had been up in the city while it all happened, and once they found out city people had rallied around. She couldn’t believe their kindness. Kindness after kindness, mostly from people she didn’t know. Unlike many of her friends on the Peninsula, she and her kids would want for nothing. Her mother-in-law had been badly affected. On seeing the ruin of her life, she was refusing to leave her own bit of paradise. The police, SES had all been wonderful to her – she couldn’t praise them enough.


Down the hill we went, into Dunalley itself. We saw the school, just a lone fireplace, with chimney, still standing - a lonely sentinel. The police station was just a mass of blackened corrugated iron. We saw a postie delivering perhaps the first mail in a week. What would she be thinking as half her addresses now didn’t exist? Across the canal and up to the town’s hotel we journeyed. Someone told that, as they came to the little town, the fireys, who would be sorely tested that fateful day, were ordered to go straight to the pub, not try and save anything else on the way. The pub was where the people were. Save the pub they were instructed, and save it they did. Since then the people had kept coming back to the pub, day after day - for many there was nowhere else.


It was a sobering trip, but eventually we left the worst of the blackness, once we crossed the Neck. We made our way through Taranna, only marginally affected, and on to Port Arthur, the hub of the Peninsula’s tourist trade. Usually bustling at this time of year, today it was eerily sombre. We found our cars. I jumped at the offer of a little ‘snot-box’ to drive back, and it turned out to be my style. It was small and manoeuvrable, so easy to negotiate along the constricted roadway. I was lucky to join straight onto a convoy heading back to Sorell, and was soon approaching Dunalley again. As I passed the hotel I only had a moment to look, and I saw him. He was leaning on the pub’s front fence, away from the rest of the milling lunch time throng on the front lawn. His head was lowered and I couldn’t discern his face. His long, white unkempt hair was blowing in the wind, a similarly long beard pressed against his chest. He was in grubby blue overalls and he was slumped, defeated looking. I needed no camera to imprint that image.


The old man raised his head and saw a mate wandering towards him. He gave a wave, wiped his eyes. He knew it would be okay. He knew, with the help of mates and family, he’d have enough spirit left to pick up the pieces. That was the bush way, the little town’s way, the Tasmanian way. 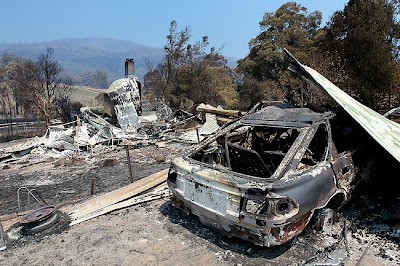