She’d just received the news from Rome. She sat down with a sigh. She knew all was not well, but still – it still was such a shock. And she was shocked, to the pit of her stomach. How to tell him? She knew how worried Willem had been about her. Soon, when he returned from the studio, it’ll be up to her to break the news. She could go down the hill to where he was, but she felt it would keep till he returned as normal. That’d give her some time for reflection – time to think it through. She’d have to figure out the best way to do it - to ease the pain for a father who had now lost his daughter.

Talitha, her stepdaughter, had so much. Her early years had been tough in that abominable Japanese internment camp, and then the loss of her mother. She’d survived all that and then accepted her, Willem’s new wife, into her life without much fuss. But the wildness first became evident, as so often happens, in her teenage years. For Talitha it did not go away – and now this was the end result - how all that wildness would pan out! She recalled a famous scribe had once said of Talitha, ‘She was completely enchanting, but somehow a bit damaged by things that had happened early on in her life…She stayed very childlike, she remained a wounded child.’ True words she thought, true words.

The man had seen the photographs he’d come for. Not for the first time did he contemplate the gulf between those up on the wall and what he was capable of producing himself. His would only ever seem merely proficient, if that, he thought – but how he loved doing them. Up there, on display, was an artistry in another dimension to his pedestrian attempts, but he found pleasure and contentment wandering around this city – pointing, shooting and hoping.

He had much to be content about in recent times, not the least of which was the deepest of joys that he was now a grandfather to a precious mite of a girl. He was immensely proud that a story he wrote decades ago was, in part, the reason for her naming. Her parents also called her Tiger for the tenaciousness already evident in her tiny being, but he had started referring to her as the Poppet. At the time he didn’t quite know why, but it seemed to fit.

Lost in his thoughts, the man continued to meander aimlessly around the vast gallery, not really looking at anything all that much, once he had finished with the photographs. He was happy just ruminating. He’d seen most of it all before in any case. Then he entered a large room of early Twentieth Century work, and out of the corner of his eye, he spotted an orangey painting of a girl. He did not recall seeing this piece in earlier visits, so he wandered over for a closer inspection – and then he was drawn to her face.

It was a face, it seemed to him, not of her time so much as beyond her time. It was a face disdainful of the trivial, disdainful of fools. It wasn’t exactly arrogance, he supposed, just more of a certainty in her own personal trajectory. It wasn’t a classically beautiful face, but it was certainly striking. He thought that if glass ceilings were around back then, she’d be doing some shattering.

He looked down at the explanation card. He saw it was painted by Augustus John, an artist he knew of but didn’t really know. It was of the painter’s daughter, but it was her moniker that caused an intake of breath in the man – and his wondering began. 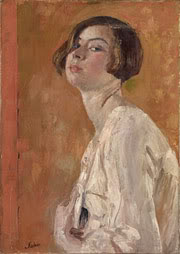 ‘Silly, silly, silly girl,’ she repeated to herself over and over again as she waited. ‘You always wanted to be the centre of attention. You couldn’t bear to be simply by yourself. You were one of the blessed ones, but that wasn’t enough. You couldn’t bear to miss out on anything, always had to be around all those vacuous rich and famous. You had danced with Nureyev, filmed with Vadim, were photographed by Lichfield for Vogue. You were so headstrong, so willful – you just would not listen. You craved the life extraordinary, and when you had it, you craved its darker side too. Then you went and married that damn Getty man. I blame him – stupid, stupid fool of a waste of space. All that money, all those houses, life a never ending party – and, so it seems, all those drugs. The telegram says heroin overdose – is there a crueler way for a father to lose a daughter?’ 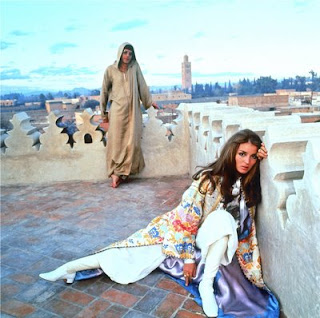 She reflected how very much Talitha was like her own father, even though there was no genetic through line. He didn’t want to be tied to a life ordinary either. Like the girl, he had talent, and like her, he made much out of it. Talitha had all that, and great beauty as well – and now this. Unlike her, despite his demons and excesses, her father knew enough to moderate when he needed to – and so he made something of himself, and is now venerated. She suspected Talitha would only be a small footnote in history, unlike her own painter father, who looms large. And now she herself was married to an artist. She was now starting to hope that Willem wasn’t too much longer. She didn’t want to put it off any longer. The telling of the thing was starting to weigh heavily.

The man had snapped a photograph of the painting and had taken it back to his island, an island even further south than the city. He didn’t really need to – it was indelibly imprinted as it had had such an impact. Once back at his idyll by the river, he took to the computer and started to search the ether to find out more about the girl in the orange painting. He soon discovered there was much about her connections, but little on her. He discovered an image – an image of a father helping a young girl, her, with a horse. He discovered another image, this one iconic, remembered by him from another time, of a glamorous young lady in occidental garb, captured by a famous photographer. The man looked at the dates and started to put it all together.

As she waited she remembered her father, a man of huge addictions who dominated her, and all those in his orbit. Now and again, though, she was the centre of his world. Vivien was the one who inherited his artistic bent and made a name for herself, but she felt she was the ‘special’ one, the favoured one. She remembered how he never called her by her given names, always by the nick name. It had stuck, all through her days, to this point. Most now would have no idea it wasn’t her proper appellation. She recalled when he first asked her to pose. She felt so greatly honoured, until she realised how much playtime it would take away. She thought of the lifestyle they had – it was termed bohemian back then. For most of the time they lived in a gypsy caravan. Her father was fascinated by the Romanies. And then there was Paris -  children, Dad, Mum and the mistress, all in a garret, all together.

As a young woman she posed for him again, in a shimmering satin dress he purchased, especially for the sitting. She loved that dress – wore it over and over till it became threadbare. Her father often said that of all his paintings, that one of her - that was the one that best captured the essence of any of his subjects. She was proud of that. She strove to retain that ‘essence’ of her youth. She vaguely knew that the painting was now somewhere in the antipodes. The woman stood up and went over to her mantelpiece to take down an old framed sepia photograph. It pictured her, as a girl, with her artist father and a horse. It was too much – that and the girl. She wept.

The man was connecting the pieces of the story in his mind. He wasn’t so sure he could do it all justice. He was back on the computer, opening up an attachment sent to him from Melrose, up north. It was of his treasured Poppet. She was now six months old and very, very bonny. His Poppet was continuing to show tigerish attitudes. The attached image was of her being placed on a white stead by Laurel, her beautiful paternal grandmother. He now had yet another piece to factor in. He took to his bath. He did his best cogitating there. There he thought, or did he dream, of all the interconnections. In his mind there was something about the two Poppets. Was it a shared spirit, a shared determination to take on the world and give it a jolly good shake? His Poppet, and the Poppet the artist did his semblance of, in his mind, he didn’t quite know what it was, but there was and always would be, some kind of synchronicity. The painting over on that wall, in a gallery, in a city on a brown river, did that for him. He wondered if he could make it all stick on paper. Win or fail at that, at least now he knew the reason why.

Poppet Pol heard the garden gate close behind her man. She heard her husband take off his boots by the back door. She wiped her eyes and replaced the photograph. She turned and prepared to tell him the news no father wanted to hear. 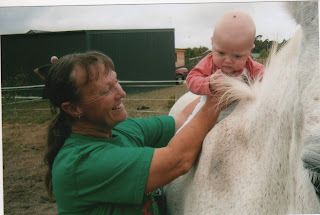